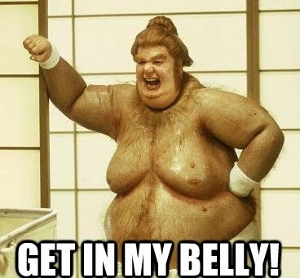 I’ve been told training is all about coming full circle.

For instance, I started lifting for wrestling back in my parents’ basement.

There was no real thought to it. I just worked as hard as I could on any given day.

It was more bodybuilding than anything, but it was better than nothing I suppose.

Then I went to college and studied Clinical Exercise Science.

I got the Certified Strength and Conditioning Specialist letters after my name.

I learned a lot during my internships at Cornell University and at Strength in Motion in Syracuse.

I was also fortunate to get additional exposure with Mark Powell at ESM high school and the Syracuse Crunch. Additionally, I spent time working with Mike Deracola of Strides Strength and Conditioning.

Then came the years of hands-on experience which began with J.P. O’Connor.

Anyway, let me tell you- over the years I’ve learned a lot.

And my training style has undergone a lot of changes. It’s gone from super basic, to overly thought out, and, in the past 4-6 months, back to the basics.

Anyway, for a while I was writing a lot about improving hip extension, and minimizing the development of the hip flexors.

I went so far as to not use any exercises that promoted the involvement of the hip flexors (especially weighted situps and Hanging Leg Raises).

I did this because I didn’t see the need to have strong hip flexors for wrestling.

On top of that, research studies have demonstrated that tight, over-developed hip flexors resist hip extension.

To me, it just made sense as to why wrestlers don’t need to strengthen these muscles.

However, it was this lack of hip flexor strength that ultimately resulted in hip pain during squats and single leg exercises. This pain affected both me and a few of the wrestlers I train.

So I went back to the drawing board and thought about what could be missing.

And after some thinking I came to realize that the wrestlers I was training weren’t doing anything to strengthen their hip flexors.

I suspected that this lack of strength could be what was causing the pain.

So to test whether or not that was the case, I started implementing Hanging Leg Raises on a weekly basis.

I didn’t have the guys or myself doing anything crazy. For the most part, this exercise was performed for 4 sets of 8-12 reps each week.

After about a month, I realized things were improving. Shortly thereafter the hip flexor discomfort was gone.

This whole process really brought to light the old saying that you’re only as strong as your weakest link.

So even though you don’t use your hip flexors very actively in wrestling, having a certain level of strength is necessary. This helps to balance everything out around the hip. Ultimately, this is a necessity for staying healthy and pain-free.

Anyway, here’s the basic progression I’ve been implementing for the last few months. If your hips are hurting, I hope this is exactly what your training program has been looking for.

There are really two big focuses during the first phase of this exercise.

First, you want to demonstrate control throughout each rep. One of the biggest problems I see with this exercise is that it is oftentimes entirely momentum based. As a result, the abs and hip flexors aren’t actually doing much.

It looks like I’m performing the exercise properly. But in all honesty, nothing is really going on from a muscular standpoint.

The second big focus is looking to maximize your range of motion. Often when people start these they’re only able to get their thighs to a parallel position with the floor.

However, just like anything, as your strength and experience with the exercise improves, your range of motion will improve.

Ultimately, this is what you’re looking to accomplish in “Phase 1.”

Once your technique is consistent in Phase 1, you’re ready to move on to the next 2 progressions.

I’m not really sure which I’d categorize as “Phase 2” and “Phase 3” so I’m just going to lump them together.

The first progression would be to work with straighter legs while looking to increase your range of motion. Ideally, you’ll want to get your feet up to the bar you’re hanging from.

The other progression I like to use is to add resistance to the existing technique in Phase 1. My preferred way to do this is with a med ball between the knees. 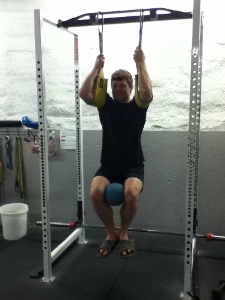 You can also hold a dumbbell between your feet if you don’t have access to med balls. 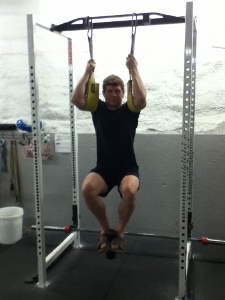 Finally, because it’s a bodyweight exercise, you can always just use Manual Resistance if you have a training partner. 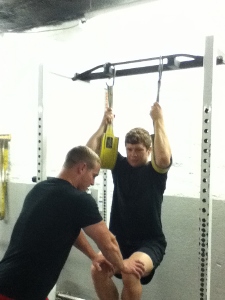 I’ve read a lot of books over the years. I’ve been fortunate to receive a pretty damn good education. And I’m thankful to have over 10 years of experience working with some high level wrestlers. Yet, the simple things that I re-discover still amaze me sometimes.

In this case, I re-discovered that you pretty much need to be strong everywhere in order to maximize your potential for wrestling.

Anyway, I hope this post not only gives you a good progression to follow, but also gets you thinking about what you may be missing in your program.

If you have any questions, please leave a comment below or email me at dickie@wrestler-power.com.