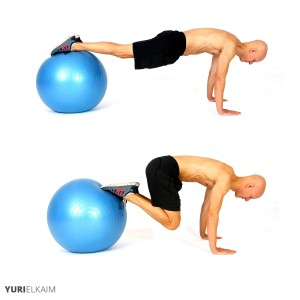 The Ball Knees To Chest (KTC) is a great way to simultaneously improve a number of qualities. Obviously, this makes it a great “bang for your buck” movement.

Additionally, I like this exercise because it’s typically not viewed as a super demanding exercise by the wrestlers I work with.

This makes it ideal for supersetting with a heavy compound exercise. By doing so, you’re able to get extra core work in while staying relatively fresh between heavy lifts.

Additionally, because it’s “lower impact” it’s great to use in a session a couple days before a match.

Anyway, here’s a quick video on how to perform the Ball Knees To Chest:

When you’re in the starting position, it’s important that you keep focus on maintaining a braced, stable core. It’s just like other exercises with a core stability component. The primary focus is on maintaining the braced core and not letting your low back “dip.”

Here’s a pic of what I mean (although it’s not specific to the Ball KTC starting position):

Notice how my back isn’t flat; an indication that my core isn’t properly braced.

In addition to improving core stability the Ball KTC also increases flexion strength. By the way, for more on flexion strength and why that’s important to develop, read this post on core research of elite level Japanese wrestlers.

On top of that, the Ball KTC also does a great job at improving shoulder stability.

Because I’ve written a variety of posts on shoulder health and shoulder stability, I won’t get into it in this post.

Instead, if you have some time, check out the posts: