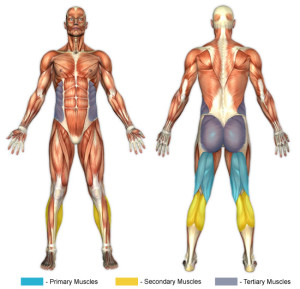 The Ball Leg Curl is my preferred way to train the hamstrings as knee flexors if you don’t have access to a Glute Ham Raise.

Additionally, because of the added balance and stability component, it makes a far superior exercise to a standard machine leg curl.

And while I do think the bulk of your hamstring training should be focused on improving hip extension strength, it’s still valuable to include knee flexor exercises in your program.

The first thing you’ll need to master is training your body to stabilize during the hip extension portion of the exercise.

Here’s a video of a Straight Leg Ball Hip Thrust:

At the top of the exercise, focus on keeping your ankles, hips, and shoulders in a straight line. You should primarily feel this exercise in your hamstrings and glutes.

When you’re comfortable with this exercise, the next part of the progression is to perform it with your knees bent at 90-degrees.

Once you have the balance, stability, and strength to perform these two exercises, you’re ready to progress.

The second progression is the actual Ball Leg Curl.

At first, there may seem like there’s a lot more going on when you compare the Leg Curl to the Hip Thrust variations. But really all you’re doing is pulling the ball from the straight leg position to the bent knee position.

Here’s a video to give you an idea of what I’m talking about:

Notice how my knees, hips and shoulders stay in line the whole time (indicating a braced and stable core as well as proper glute activation).

Finally, there is one progression you can go to from here- the Single Leg Ball Leg Curl.

Then, progress to the version where your knee is at 90-degrees.

Finally, move on to the Single Leg Ball Leg Curl: