The Bench Press is one of the most common exercises in any type of strength and conditioning program. In fact, I can’t think of a program I’ve seen that doesn’t include the Bench Press.

Well, I guess many of the programs I design don’t have it. But, I do have wrestlers perform the Floor Press, which is basically the same thing. It’s just a lot easier on the shoulders.

And that’s what inspired me to write this quick post. Because the Bench Press is such a common exercise, I don’t see the point in detailing the technique. However, I do want to talk about what you can do to make this exercise easier on your shoulders.

But first, let me explain why this is important.

The fact of the matter is, you’re a wrestler. Your success isn’t dependent, or directly correlated to Bench Press performance. If it was, you wouldn’t be a wrestler, you’d be a powerlifter.

So many wrestlers think you have to Bench for whatever reason. They more than likely feel this way because it’s seen as the ultimate measure of strength. This is unfortunate because it’s nowhere close to achieving this label.

With that, I ask you- who has a better chance at reaching their potential?

Wrestler A- This wrestler is constantly experiencing shoulder pain. As a result, they can’t wrestle hard very regularly. They sometimes miss practice for physical therapy appointments. They’re less motivated to lift and do other activities to improve their performance because their shoulders hurt.

Wrestler B- This person is the opposite of wrestler A. They have little to no shoulder pain. They can practice hard regularly. They don’t miss practice. They are able to get in extra workouts because they’re not in pain.

Which wrestler has the potential to improve more over the course of a season, or off season?

That’s why I prefer using the Floor Press. It’s a horizontal press that minimally affects the shoulders.

But, there is a way to Bench Press that takes stress of the shoulders. The best part, it’s supported by research. Read about it here- Grip Adjustment For Shoulder Health.

Simply use a shoulder width grip (what I call a close grip).

Here’s a picture to give you an idea of what I mean. 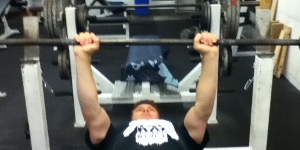 This grip width has been shown to put minimal stress on the shoulders. So, regardless of whether or not you’re currently experiencing shoulder pain, if you want to Bench Press, I highly suggest this grip. Yes, you will use less weight, especially at first. But you will develop better as a wrestler, and that’s the end goal, right?