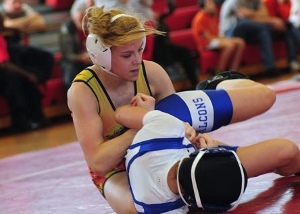 This post, in a way, is an offshoot from my last post (What Sets Top Wrestlers Apart From Everyone Else?).

The study I’ll be reviewing today was performed by many of the same researchers the year after publishing their findings on the 92 male wrestlers.

This time, the researchers elected to put 35 female wrestlers through the same testing to see what similarities and differences existed between elite and amateur level wrestlers.

The subject pool consisted of 35 female wrestlers (all freestyle, since that’s only style contested by females at the International level).

The wrestlers were divided into 2 weight groups.

There were 18 total light weights. 6 were elite and 12 were amateur.

There were 17 total middle weights. 7 were elite and 10 were amateur.

They were also divided into elite and amateur categories.

Elite females either had at least one experience in an international FILA tournament such as the European and World Championships or, they had at least 4 years of regular training experience.

8 of the 13 elite females had won at least 1 medal during an International tournament.

Amateur females had not yet taken part in an International competition. However, they had been a finalist at their respective national championship the previous season.

Again, just like in the last study, the difference between “amateur” and “elite” level wrestlers isn’t that much, in my opinion.

This study was also conducted during an International training camp during the pre-competition cycle. Basically, while the wrestlers were training, it was more in a base building style, rather than an intense phase that’s usually toward the end of a training camp.

None of the wrestlers were involved in any kind of weight cutting at the time.

All of the wrestlers followed the same eating plan during the 3 days of testing.

None of the wrestlers increased or decreased their body weight by more than 1% during the testing period.

When data was normalized for to account for differences in body mass, muscle, etc. there were no significant differences detected between elite groups.

However, the elite groups still were between 17.8% and 22.3% better than the amateurs.

Peak lactate was between 13-19% higher in elite females, however, this was found to not be significantly different.

No significant differences were measured.

No significant differences were found in this test.

There was an insignificant difference between elites and amateurs in the light weight class (2.2%).

In the middle weight class, there was a significant difference (9.4%) between the elites and amateurs.

Both absolute and adjusted 1 rep max strength in the squat and bench press were both significantly greater in the elite groups. The range was between 13.4% and 33.1%.

No significant difference was observed in the elite groups when the data was adjusted to account for differences in body mass.

Additionally, power output in both strength tests ranged from 15.9% to 34.4% higher in elite wrestlers.

The differences were significant across the board.

The elite light weights were 13.2% stronger than amateurs.

The elite middle weights were 10.3% stronger.

When the data was normalized for body mass, there were no significant differences between the elite groups.

Unfortunately, no statements were made regarding elite vs. amateur performance after the data was normalized.

In the sit and reach test, the elite light weights were 10.9% more flexible, however, the elite middle weights scored 15.8% lower than their amateur counterparts.

The straight leg raise of the dominant leg was as follows:

The straight leg raise of the non-dominant leg results were:

Both elite groups were significantly older, had more training experience.

Elite light weights were 8% older and had 29% more experience.

Elite middle weights were 10% older and had 27% more experience.

Both elite groups had significantly more fat free mass. However, no significant differences were found between groups for height, weight, and body fat.

This suggests that the elite wrestlers carried around more muscle.

**By the way, the various tests for conclusions above were all the same as in this post.

According to the researchers, the results suggest the most important qualities to develop in female wrestlers are power and anaerobic capacity.

Additionally, training experience was identified as one of the most critical success factors.

The least important qualities in female wrestling are hamstring flexibility and sprinting ability.

Differences Between Males and Females:

Flexibility- Elite women were 13.2% higher in the sit and reach. They were also 7.6% more flexible in both single leg raise tests.

All data was normalized for body mass, etc. before the researchers arrived at these numbers.

My quick conclusion- based on this info, to all you ladies out there who wrestle against guys, you’re my new heroes!