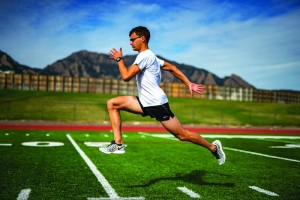 Bounding is a newer exercise that I’ve been using in programs to improve shot speed.

I began adding them in programs a few months ago based on some of the conclusions I’m drawing from my research.

I’m starting to realize a couple big findings/conclusions regarding carryover of exercises to improvements in shot speed.

First, direction of the exercise you’re performing is super important.

Don’t get me wrong, these are principles I have known about since college. However, there is no research that has been performed on wrestlers comparing physical qualities and how those qualities directly influence specific movements. For example, Triple Jump performance and a correlation to shot speed.

Because of that, I decided to take it upon myself to start tracking and measuring shot speed and power. This would give me a better idea of what’s most important in a performance program for wrestlers.

Anyway, I first started to realize the importance of both direction and movement speed after the first round of training. During this training block I had the wrestlers I train start using Box Squat Horizontal Jumps.

Since then I’ve expanded the number of movement-specific (horizontal) and speed-specific exercises (in a nutshell- maximally fast, just like you’d shoot a leg attack).

Bounding is one of the additions.

Here’s a quick video of me Bounding (it’s pretty bad):

Basically the idea is to cover as much horizontal distance as possible per single leg explosion. It’s similar to a sprint but think of each leg drive as a jump.

Again, don’t over-think this exercise. Instead, focus on the key idea of covering as much distance as possible. This will force you to be as explosive as possible with each leg drive.