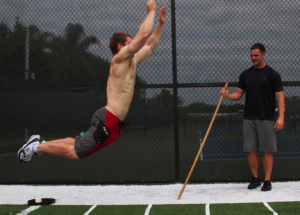 If you read my blog you know that I’m slightly obsessed with increasing shot speed and power.

Fortunately, I’ve been able to measure consistent improvements in shot speed/power every 6-8 weeks with the guys who are following my programs and/or working with me directly.

Before I started the research I made a commitment to myself. I said that I would do as little as possible to change my current training system. I knew this would allow me to better identify what was having a positive impact on shot speed and power.

I decided to simply add some explosive exercises at the start of every training session. On top of that, I didn’t wave the volume of the jumps. This way, I could be more sure that it was the implementation of the exercises that were contributing to any improvements.

The Box Squat Horizontal Jump has been a mainstay in all of the programs I have designed and implemented since I started the research.

What have I found?

In a nutshell- as the distance per jump increases, shot speed and power increases.

When I first started using this jump, most of the wrestlers I was working with were jumping about 8 feet.

After 6 months most were consistently jumping about 10 feet.

Because I didn’t implement many exercises, I am very confident that this jump variation has a huge impact on increasing shot speed and power.

Anyway, here’s how to do it:

Note the pause before each rep. I think this is important simply because in a match, you’re rarely “loaded” before you take a shot.

What do I mean by that?

There usually isn’t tension in your muscles like there would be if you were to perform a Depth Horizontal Jump:

Anyway, here’s a variation/progression I would use if you feel like your performance is starting to plateau. I also like to use this progression 6 weeks before major tournaments.

By eliminating the arm action, you force your legs/hips to produce more force. It’s a great way to peak power development.

Want to see why and how I program Horizontal Jumps? Read Lifting Programs for Wrestlers.