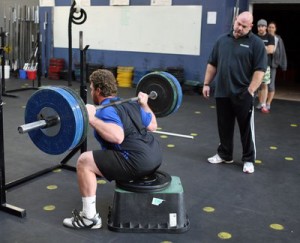 Before I begin to introduce the Box Squat Progression, I have a recommendation.

For a TON more info on Box Squats and why they’re superior for wrestlers, read- Strength Training For Wrestling- Box Squat.

Alright, with that out of the way, let’s get into it.

Just like any other exercise I teach, the first progression is mastering the movement with your bodyweight.

If you can’t perform a perfect Box Squat with just your bodyweight, why the hell would you want to put a bar on your back?!

All that’s going to do is promote the development of bad technique AND increase your risk for injury.

If you’re just starting off lifting, don’t be embarrassed starting with this.

I worked with a heavyweight modified wrestler last summer and he couldn’t even perform the bodyweight Box Squat without technical breakdown.

It took close to a month of hammering Progression 1 and 2 before he put a bar on his back.

I had him Box Squat 3 times a week for the first month.

But after his technique was dialed in, he took off.

After 3 months of training (remember the first month was light technique work to build a base of strength) he was squatting 165 for sets of 5!

So, essentially he went up 165 pounds in 3 months!

See what consistency and the right program can do?

Focus on staying upright, driving the knees out and forward, and sitting under control.

Just squat as though the box weren’t there.

When I first started Box Squatting I sat back. However, after years of doing that, I finally concluded that doesn’t carryover to other squats except a geared (squat suit) squat.

It’s why the wrestlers I initially worked with had so much trouble when they switched from Box Squats to Free Squats.

So, in a nutshell, focus on squatting as though the box weren’t there and everything should fall into place.

Once you have mastered the bodyweight version, it’s time to move on.

Depending on your level of strength this may occur within your first session or it may take a month.

Regardless, don’t rush it. Strength training is a marathon, not a sprint.

When it turns into a sprint, injuries start happening.

If you’ve mastered the bodyweight version, but find that the bar is too heavy, you’re a perfect candidate for Progression 2.

Here’s how to do it.

Once you’ve mastered that and have adequate strength, it’s time to move on to Progression 3.

No need for much here.

It’s just a standard Box Squat with a bar.

Here’s an old school video of me demonstrating.

Finally, if you experience pain in your shoulders, elbows, or wrists when using a straight bar, read this post. In the post I detail lots of alternatives to save unnecessary wear and tear on your upper body.

And, if you want to read more about Box Squats and how I use them in programs read- Lifting Programs for Wrestlers.