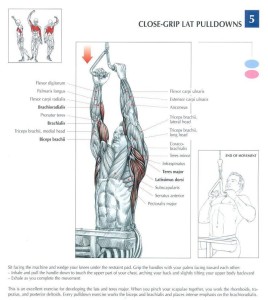 The pulldown is a very common exercise in most strength and conditioning programs. And while it’s not the most functional, or best pulling exercise for wrestlers, it’s still a good exercise.

…By the way, I think row variations have better carryover for wrestlers. But vertical pulling is still important to include.

Anyway, common bodybuilding/bro knowledge would say that if you want to get a wide back, you have to use a wide grip. However, I did not study “bro science” at Ithaca College. Instead, I studied Clinical Exercise Science.

And in the CES program I learned about functional training.

Functional training is used to bridge the gap between strength training and sports performance. It looks to accomplish this by simulating movement speeds, joint angles, etc.

In the case of the pulling you do in wrestling, very little, if any, is done with your hands far apart.

Instead, your hands are usually very close together. In fact, most often they are locked, especially when you’re in on a leg attack.

That, among other reasons, is why I heavily favor close grips when performing upper body pulling exercises like the pulldown.

Here’s a video of me performing a Close Grip Pulldown:

One of the little “tweaks” I’ve been having the wrestlers I work with implement lately is a hold on each rep.

Usually after you successfully get in on a leg or body lock, you then need to maintain it against your body as you finish the takedown, throw, mat return, etc.

So, by adding a hold, you’re making the exercise that much more functional. Making adjustments to better simulate the specific muscular demands of wrestling will ultimately lead to a better carryover to your performance on the mat.

And isn’t that why you lift?

You want to wrestle better and win more matches, right?