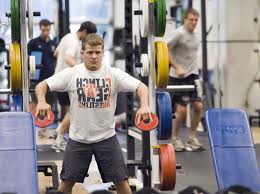 A college wrestling workout is oftentimes sought by high school wrestlers. It’s usually their belief that it will take their game to the next level.

However, based on my experience working with both high school and college wrestlers, I really don’t find that there needs to be a difference.

In fact, a number of the college wrestlers I train go through the same base building procedures I would a put a pee-wee wrestler through.

Because the same techniques that make up the foundation of any solid strength training program for wrestlers must be learned and mastered. This is true regardless of the age and experience level of the wrestler.

Additionally, “wrestling age” and “strength training age” are two different things. I’ve worked with very high level wrestlers throughout my career. Some of the best wrestlers performed like beginners in the weight room despite how good they were on the mat.

Being the strength coach of Binghamton University wrestling team, I’m going to use this post to analyze some of the college wrestling workouts I’ve found on YouTube.

Also, keep in mind that the reason I don’t post videos from the college wrestlers I train is for NCAA Compliance purposes.

I’ve spoken to a number of NCAA Compliance officers as well a couple members on the NCAA Committee on Infractions. Specifically, we’ve talked about the proper and improper use of names and images of NCAA athletes and how they can and cannot be used. While I’m far from an expert, I do have a pretty good understanding. Unfortunately, I see infractions on the Internet on a regular basis.

In fact, the first video that I was going to include in this college wrestling workout analysis post was recently made private on YouTube. I would bet due to NCAA Rules.

I know a lot of people have probably preached to you that it’s super important to use perfect technique and slow, controlled motions when lifting. But the strength coach at Iowa puts it well. He said that sometimes it’s more about just getting the weight up and using your body as a unit just like you would in a match.

While I do think it’s important to use good technique, there are times of the year, when I put a bigger emphasis on simply moving weights.

For instance, about 6 weeks before the end of the year I use a lot of reverse bands with the wrestlers I train. I like using a reverse band setup during this time of the year for a couple reasons.

First, it’s a great way to overload their bodies to really prepare them for the final push. About 2 weeks out of the state qualifying meet or conferences I have my wrestlers back off on their weights.

Even though the bands are providing assistance during the lift, for whatever reason a lot of the wrestlers I train don’t realize it. All they see is more weight on the bar than normal and that gets them fired up beyond belief!

So I definitely see the value in this type of approach, especially at the end of the year. It certainly contributes to the Iowa “find a way” mentality. I could see how it contributes to their ability to always seem to be peaked for the NCAA tournament.

While these aren’t videos of a college wrestling workout, but rather Olympians preparing for the Games, there are a lot of great things going on. However, I think the most important thing was said by Coach Jackson.

He spoke about the importance of letting the guys do what they’ve been doing and not making major changes. That can sometimes be a huge mistake- major changes prior to competition.

Stick with what has worked for you in the past. You can never be certain how you’re going to respond to the changes you’re looking to make. Ultimately you want to be ready for a peak performance, and last minute changes could prevent this.

It’s always good to keep an open mind and try new things. Just make sure it’s the right time of year to implement major changes to your training.

With that said, here are a few things that I liked in the video.

1. Ben Askern performing Glute Ham Raises. The GHR is the best way to train your hamstrings. Stronger hamstrings will help you sprawl better, shoot faster, throw with more power, and apply more pressure on top (either for a breakdown, or for a gut wrench).

2. I saw a few different approaches being used.

– “Functional” training which consists of full body stability exercises (one example was pushups with each hand on a medicine ball).

– Olympic lifting which was demonstrated by all of the Cleans, High Pulls, and DB Derivatives.

– Powerlifting which consists of benches, squats, usage of chains, etc.

– High Intensity Training by Tom Brands which consists of taking exercises to failure, usually on machines.

HIT has been criticized as not being super functional for a wrestling workout, or any workout for that matter. Read more about why this isn’t the best way for wrestlers to train in Wrestling Strength Workouts – Say No To HIT.

Most opponents of HIT don’t see the carry over to sitting on a machine with a fixed range of motion. This eliminates the wrestlers’ need to stabilize the weight. This is the opposite of what you have to do on the mat, right?

While I don’t think it’s the best way to train, it does have it’s place. It’s a great way to build mental toughness.

Do I think it should be the only type of training going on?

No. But everything has it’s place.

3. Additionally, the heavy pulling is something to take a look at and consider. Weighted chinups along with heavy DB Rows and BB Rows look to be staples.

I often find myself saying the same things over and over. For instance, I can’t count the number of times I’ve said that wrestling is a sport of pulling and therefore, training the pulling muscles should be a primary focus of any strength training plan for wrestlers.

I also like the fact that weight training at the highest level still focuses on hammering the tried and true exercises.

Because in a match the majority of the pulling is done with your hands either very close to one another or locked together. Think about pulling in a leg after a shot, pulling in a body lock for a throw, and pulling in your lock to tighten up your gut wrench.

I just don’t see the point in doing a lot of wide grip pulling for wrestling. Especially when 90+% of the time in a match your hands are either together or very close when you’re pulling.

Is it a big deal?

But I wanted to throw it out there to get you thinking about how you can better tweak your program. Hopefully it will allow you to be better prepared for the situations you’re going to encounter on the mat.

You can tell that the strength coach from Wisconsin is a big believer in power development.

He puts a big focus on box jumps and other plyos, Olympic lifting, and supersetting strength movements with speed movements to maximize overall power development.

I think this video shows some great ways to build full body explosiveness.

Additionally, I think the reactive grip drill with the bumper plate is a great way to build strong hands, especially thumb strength. However, I’m more in favor of this style of grip training, rather than the direct grip work shown in this video.

One of the things I’m not really big on is the agility drill shown towards the start of the video.

I know a lot of coaches believe in them.

Ultimately, the fact of the matter is if it’s getting results and the wrestlers believe in it, then keep it in the program.

I’ve used agility ladder drills myself and with some of the wrestlers I train.

However, in my opinion, a lot of the agility and speed seen in wrestling has to do with your ability to read, react, and anticipate your opponent.

My thought is if you have great setups and can use them to anticipate where your opponent is going to be before they realize it, you’re going to look pretty fast on the mat.

As a result, my training is more focused on developing and maximizing strength and power. A lot of my feelings on these types of drills are due to the fact that I was brought up in an environment where strength and power were the focuses of the program. For example, my first internship experience was at Cornell University with the wrestling team.

I got to work with guys like NCAA Champions Troy Nickerson, Travis Lee, and Jordan Leen, along with the other All-Americans on the team. The bulk of their training was from heavy, complex lifts like cleans, squats, bench presses, and weighted chinups. This experience really helped me to better appreciate the benefits of this style of training.

Again, I write about it all the time- in a sport of pulling, doesn’t it make sense to strengthen the muscles that pull?!?!

Too often wrestlers want to start a weight training program and just start going hard and maxing out all the time. However, many haven’t ever touched a weight before in their life. Without the proper technique base, all they’re going to do is get hurt.

Developing your technique should be a regular focus. I’ve lifted competitively as a powerlifter for over 5 years and before that I started lifting fairly consistently after my 9th grade year of high school.

So while I don’t have all the experience in the world, I do have a decent amount. Despite all of my experience, I’m constantly tweaking and reassessing my technique.

It’s the number one factor between a successful or an unsuccessful heavy lift.

So always focus on improving your technique in the weight room, just like you do in the wrestling room.

With all of the no grunting rules and crap like that that in gyms across the country, it’s difficult to train with appropriate intensity. If you want to maximize your potential in the weight room, you’ve got to push yourself past the point of comfort.