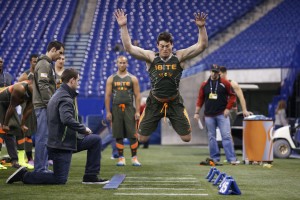 The Depth Horizontal Jump is a fairly new addition to the programs I design. However, based on the increases in shot speed it’s contributed to so far, I am confident it will be part of my programs for years to come.

A word of caution, though. Pretty much any strength coach that writes about Depth Jumps suggests having a double bodyweight squat before you start using them.

It just shows a good base level of strength.

Yes, there is a risk of injury when performing Depth Jumps. However, I don’t think it’s as much of a concern for wrestlers.

The reason is because I don’t see much of a point to performing drops from a high box. As a result, the wrestlers I train don’t go about 18 inches.

I don’t have them go higher because it’s not necessary. Typically Vertical Depth Jumps are used to increase reactive power in vertical athletes, like basketball players. In basketball, you regularly have to land from a maximal jump and immediately jump again. That’s the primary reason behind the double bodyweight squat suggestion. More strength is needed to properly absorb the impact.

However, in the case of wrestling, there isn’t a need to develop reactive power from tall heights. Instead, I think it’s better to drop from lower heights and emphasize getting off the ground as quickly as possible.

Before I go further, here is an example of a Depth Horizontal Jump.

Ok, now that you have a better idea of what I’m talking about, here are some things to keep in mind.

1. Don’t just land and jump. Think about attacking the ground and driving off of it. I know this may be tough to understand. Just do your best to land in a position ready to jump and do so as quickly as possible.

2. Adjust the height using the following rule of thumb. If you can cover the same or more distance during a Depth Horizontal Jump as you can performing a Seated Horizontal Jump, that’s good. You can consider increasing the height of the box. If you can’t cover the same distance, lower the height. Keep in mind, if you’re within a few inches, I wouldn’t worry about it. This is more for wrestlers who are covering a noticeably shorter distance.

3. I don’t see the need to go above 18-20 inches. You can as long as you’re adhering to “rule” 2 above. But I don’t think you necessarily need to do this. Perhaps if you’re able to cover 8-12 inches or more in the Depth variation compared to the Seated Jump, then you should consider moving up in height.

If you want to read more about Depth Horizontal Jumps and why they’re in programs I design read- Lifting Programs for Wrestlers.