While there is an array of topics I can focus on in this Exercises For Wrestlers post, I’m specifically going to hone in on core strength.

Here’s what he left me:

“Dickie, my son struggles with rounding his back on deads, power cleans, etc. Would it be better to drop weight until his form is perfect or work on form with the heavier weights.

If you recall he is using your 13 week program and getting good results. He is beginning week six on Friday.”

As you know, I don’t feel as though rounding your back is some hugely dangerous thing. For more on that, read my post- Low Back Strength for Wrestling.

However, it does tell me that the core is not strong enough to properly brace against the external resistance.

Being able to brace your core during a match can mean the difference between finishing a takedown and getting sprawled on. 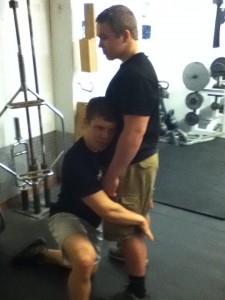 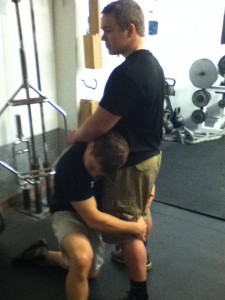 Which scenario does it look like I’m more likely to not finish the double leg?

It also may be the difference between your ability to stand up and get an escape instead of getting ridden out.

Therefore, you must select functional core exercises for wrestlers that are going to carryover to an improved performance on the mat.

Don’t get me wrong, I’m totally ok with using exercises like Decline Situps, Hanging Leg Raises, and other lifts. However, I feel there are a few core exercises for wrestlers that have a better transfer.

The way that I’ve arrived at the exercises that I’m going to detail is twofold.

1. I actually do them. Even though MMA and wrestling are not exactly the same, the physical skills you need to be successful are very similar.

On top of that, leading by example is very important to me. It frustrates me when people sit behind a computer and make recommendations when they themselves don’t lift, compete, or train anyone.

2. While I do have a formal education in Clinical Exercise Science, I don’t think it takes a genius to look at the pictures above and realize which position is going to produce more success. However, if you don’t have the strength and stability to maintain good position, you will inevitably end up on the losing end of situations like the ones above.

After understanding the primary purpose of the core in wrestling, the next thing to consider is the typical duration it’s under stress.

I have yet to see someone get in on a double leg and be able to hold that position for very long.

Either the person shooting gets a takedown or the opponent sprawls. The same goes in a stand up situation.

This means that functional core training should be centered around developing stability by using higher intensity exercises for a shorter duration.

This is the opposite of what most wrestlers tell me they do to “strengthen” their core.

Does this sound right?

If you wanted to get strong legs would you do tons of squats and lunges, or just a few heavy sets?

Strength is built with heavy weights and lower reps. The last time I checked the abs/low back muscles aren’t any different from the other muscles in your body.

So why train them differently?

Ok, let’s get into some of my favorite core exercises for wrestlers.

Oh, and by the way, if you want to start using a program designed to improve your performance on the mat that includes these core exercises, then check out my Program Packages page…

I’ve been super high on the Grappler the last few months. It is by far the best way to build the Anti-Rotation stability needed to resist the movements of your opponent. This stability is crucial when you’re looking to finish shots, stand up, etc.

Although I have handle attachments and an actual Grappler machine, setting one up at your gym is easy. Just find an unused corner and put one end of the bar in it.

Using the handles will make this exercise more challenging. However, if you don’t have access to a pair, just take a grip on the end of the barbell and add weight to increase the difficulty.

The Ab Wheel is one of my favorite exercises for wrestlers in general. It has been and will always be in the lifting programs I design.

Start with the basic version on the ground. Hammer this exercise until you’re able to achieve a full range of motion with a braced core.

From there you can increase the difficulty by elevating the height that your knees are on.

Finally you can progress to a Standing Ab Wheel.

Always work on increasing your range of motion as you get stronger.

On a quick side note– I was working with 4x D1 National Qualifier, Nate Schiedel, the other day and he was having trouble “feeling” his abs working while performing Ab Wheels.

What I had him do to correct this was simple.

I asked him what exercise(s) he felt he got good abdominal activation during.

He told me that Decline Situps were good for this.

That was all he needed to get them firing correctly.

Remember- as much as we’re not bodybuilders, it’s very important to have activation in the muscles that are working.

While you may be performing it properly, being able to “turn on” the muscles that should be firing is important.

For example, in the case of core training for wrestling- by training your abs to fire appropriately during an Ab Wheel, you will “teach” your body to know what it feels like when you need to brace your core in other situations.

Having this “neural knowledge” (your ability to fire the muscles the way you need them to perform in a given situation) will make you a better, more effective wrestler.

This is very similar to the Ab Wheel (which is why it’s 3.5 and not 4 exercises). For those who don’t have access to an Ab Wheel, or are looking to change things up, the Ball Rollout is a great core stabilization exercise.

Start by performing a plank on the ball and bracing your core. Your shoulders, hips and ankles should form a straight line.

From there, roll the ball away by extending your arms at your elbows and shoulders. Keep your core locked and stable throughout. Also, be sure to work within a range of motion that allows you to maintain control.

As you roll the ball away, you will notice your core beginning to fire more. If you notice that you lose your ability to brace your core (you’re not able to keep your back flat and your stomach starts to dip toward the ground), simply cut down on the range of motion. This will ensure you stay locked throughout.

Here’s a video to give you a better idea.

The final exercise for developing a rock solid core for wrestling is the Good Morning.

I know what you’re thinking- this isn’t an ab exercise.

And while you’re right to a certain degree, there is still a high level of core stability needed to perform a proper Good Morning.

Just like the other exercises I detail above, work within a range of motion that allows you to maintain a braced core. Don’t go lower if it makes you lose tightness in your core and causes you to round your back.

Additionally, remember why you’re performing this exercise- to improve your ability to brace your core. So make personal adjustments and work with weights that best allow you to activate your abs and to provide stability.

All in all the examples above all make great core exercises for wrestlers. The primary reason is because they train the muscles to fire the same way they are going to need to fire on the mat.

However, being someone who’s always open to new ideas, here are other core exercises that I’m currently experimenting with.

Because you often need to brace your core when you’re on one or two knees, I’ve started experimenting with kneeling stabilization exercises.

The first is the Kneeling Grappler. The execution is the same as the Grappler, you’ll just be on both knees. 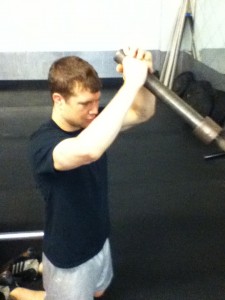 Maintaining consistent form with this exercise is of the utmost importance. As you increase the weight, you may experience the tendency to want to use your hips.

If you notice yourself starting to do this, simply lower the weight and work with resistance that allows you to remain motionless at your hips.

Although I’ve been familiar with these since my college days, it never dawned on me to use them.

They should be pretty easy for everyone to perform since almost every gym I’ve been to has a cable machine of some sort.

Here’s a quick video of me demonstrating a Split Stance Kneeling Cable Lift.

You can perform the lift to either side.

You can also perform it to both sides as a Chop. 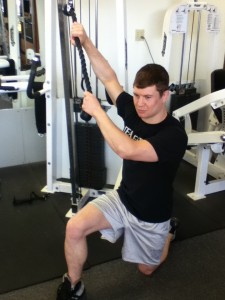 The idea is to train your core to effectively brace against the forces acting on it and the movement occurring around it.

Focus on moving through the shoulders. Additionally, make sure the weight you’re using doesn’t force you to initiate the movement from your hips.

Keep your core braced and upright throughout the exercise.

If you notice any motion occurring at the hips or core, simply lower the weight until you’re able to properly brace.

Here’s a video of me performing a bad chop.

These exercises make up the great majority of core exercises I use with wrestlers.

I’ve really started to whittle away at the bullshit the last few months.

Instead I’ve focused on just hammering the crap out of proven exercises. Since then things have really taken off for me and the wrestlers who follow my programs.