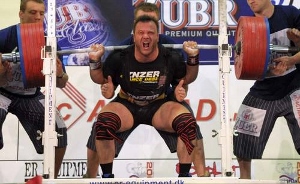 We all know squatting is important for overall leg strength.

And if you kick ass and read my blog regularly, you know that I’ll be using a Tendo unit to measure and track the power and speed of wrestlers when they shoot. If you didn’t know, then read this post.

Anyway in that post, you learned that there isn’t actually any definitive research that says “if you put 10% on your squat, or squat X times your bodyweight, you can expect X% improvement on your power and/or velocity when taking a leg attack.”

Fortunately, even though I’m only a couple weeks into testing wrestlers, I’m already starting to see some trends.

One of the trends I’ve found is that the higher the ratio of your squat to your bodyweight, the higher your peak power will be when you take a shot.

For instance, 3 of the wrestlers I currently work with have more than a double bodyweight squat.

They also produce 3 of the 4 highest Peak Power measurements per pound of bodyweight out of all of the wrestlers I’ve tested.

And even though I’ve only run tests on 18 wrestlers so far, I think it’s safe to assume that, for the most part, we’ll see a similar trend in future tests.

Anyway, if you’re following one of my programs, you have a pretty good idea of the system I’m currently using.

Just like any lift, there are a few common breakdowns in technique that can occur. However, by implementing specific exercises, you can fix these.

“A chain is only as strong as its weakest link” is a phrase that can be used for this situation.

The idea behind the exercises below is to improve the strength in the muscle(s) that are causing the breakdown in your squat. Ultimately the regular use of one (or more) of the specific exercises below should correct the issue and bring up your squatting strength.

The first breakdown in the squat is the knees caving in (knee valgus).

Here’s a video of my wife, Laura, squatting at a meet. She was famous for her knees caving in. She even developed the nickname “Crazy Legs” from some of her training partners.

This is typically indicative of weakness in the Glute Medius.

Strength coach Bret Contreras has a super thorough post on how to address this issue from a number of angles (click here to read it).

However, if you are looking for the way I most regularly address it, here it is:

This doesn’t need to be over-thought or programmed in a special place. I usually have it toward the end of the workout for 3-4 sets of 8-10 reps with about a 3-second hold on each rep.

For guys who have this problem, I track their progression with the band tension they’re using. If they’re getting stronger at this exercise, but their knees are still caving in when they squat, this means that we need to address this issue differently.

Additionally, focusing on driving your knees out while you squat is helpful.

Between regular use of the Band Hip Abduction and focusing on driving your knees out when you squat, you should be able to correct the issue within a of couple months.

This issue is the result of one leg being stronger than another. It’s not uncommon at all for one leg to be stronger. However once it gets to the point where something like this is happening, it should be addressed. 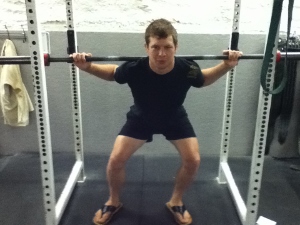 I’ve written about the importance of single leg strength for wrestling and the various ways to progress exercises. However, for a situation like this, I like to get back to the basics.

One of the things I watch for during this exercise is if the knee starts to rotate in. To correct this, simply angle your foot out and focus on keeping your knee in line with your ankle.

Anyway, by taking the stabilization component out and allowing the wrestler to focus on pressing, it’s a lot easier to identify which leg is weaker. To help bring things into balance faster, I have them start each set with the weaker leg first.

For instance, let’s say I have the wrestler perform a single leg press with 100 pounds and he does it for 8 easy reps with his right leg. However, with his left leg, he’s barely able to get 6 reps. This means that going forward he will begin each set with his left leg. The right will follow and always for the same number of reps.

Again, similar to knee valgus situation above, be conscious of how your body is shifting and focus on squatting straight up and down.

Sometimes that means lowering the bar weight and using a resistance that you can perform proper reps with.

Don’t worry if you have to do this, it’ll be better for you in the long run.

As far as programming goes, if you have a shifting problem, I usually like to use a specific exercise like the single leg press immediately after squatting. Generally I’ll have wrestlers perform it for 4 sets of 8-15 reps.

If you don’t have a shifting problem, I suggest throwing this at the end of a training session for 3 sets of 8-15 reps. I would suggest this only if you didn’t perform a single leg exercise earlier in the session.

Fortunately I haven’t seen this is any of the wrestlers I work with for many months. However, it’s been an issue in the past for some guys. 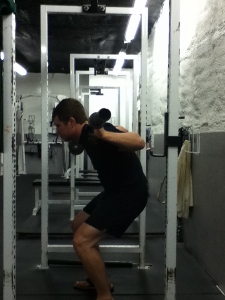 I’ve actually used a couple of different strategies to correct this. Here are the 2 that the guys have said worked the best.

The wrestlers I’ve had perform these have all said they felt like it made a huge difference.

Because it’s such a compound exercise, this is best performed immediately after squats for 3-5 sets of 6-8 reps.

Regardless of how you decide to implement this exercise, just remember the purpose- to train your upper back/core to stabilize more effectively.

So, if you find that you’re rounding during any of the reps, lower the weight and really focus on proper execution using a tight, arched back.

Another way to specifically target the upper back musculature is with Seated Band Good Mornings:

This doesn’t train the core to stabilize, so I don’t use it as often as the standard Good Morning. However, it’s a great option to get additional work in.

This isn’t a huge strength builder. But it is another possible solution if you find yourself rounding during heavy squats.

Additionally, just like in the other two situations, being conscious of the issue is a key to success.

I usually suggest two things if you find yourself rounding.

First, I have them focus on squeezing the bar while simultaneously driving their elbows forward when coming up.

If that doesn’t seem to work, I have them think about squeezing the bar and trying to bend it across their back. This forces them to drive their upper back into the bar and, as a result, engage the muscles more. 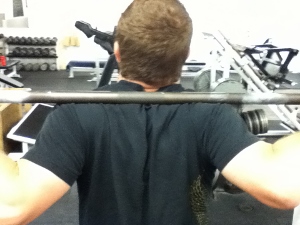 Basically, focus on squeezing the bar as tight as possible. That, generally speaking, is a great way to tighten up your whole body. Ultimately, it should help minimize and/or eliminate any rounding that you may be experiencing.

Sorry to say, but the exercises above won’t make you a bigger squatter overnight.

If it was as simple as going to the gym once or twice a week and adding 5 pounds every workout, I’d have a different job.

Developing a big squat (which, based on what I’ve found so far, will improve your peak power output when shooting) takes a lot of hard work.

If you find yourself regularly missing squats or grinding through weights that should be easy because of any of the 3 issues presented, I hope this post helps you.

I’m sure your coaches will thank you for your bigger squat when you’re scoring one explosive takedown after another.

Why You MUST Squat Low