The Glute Ham Raise is one of my top choices for wrestlers for strengthening the hamstrings/glutes (the famous “Posterior Chain”).

In the post I detail some alternatives to the GHR, since it’s not a common piece of equipment in most commercial gyms.

However, what I don’t do in the post is go through how to progress the exercise. So that’s why I’m sitting at my computer typing away today.

The first part of the exercise is first learning how to use the GHR. For many people, it can be somewhat of a strange exercise. As a result, I’ve seen one very common breakdown in technique (primarily the result of a lack of experience).

The most common issue I see is only moving from the hips:

This is the most common issue I’ve seen when teaching people how to use the GHR. It’s primarily the result of a combination of two things.

First, most people are used to having their legs anchored while performing 45-degree back extensions. Because of this, they tend to initially treat the GHR the same way (by locking their lower body into place).

Second, there is sometimes a bit of fear associated with driving out to perform the exercise. Don’t feel like you’re being a wimp or anything, the fear is totally normal. I mean think about it- doesn’t your body naturally try to avoid falling/pain?

See, it’s not your fault so blame your body’s instincts!

Anyway, here’s what I’ve found to be the best way to learn how to perform a GHR:

It’s the same way I feel is the best way to teach someone to squat– simply get familiar with the bottom of the exercise.

Usually once the person is comfortable with the bottom position, they’re good to go.

However, if they don’t have the strength to return (as indicated by the video below), you’ll need a spotter to help. By the way, this is the most common breakdown in technique I see once a wrestler is able to get to the bottom of the GHR.

Here’s how a spotter can help you build your strength to perform unassisted GHRs. 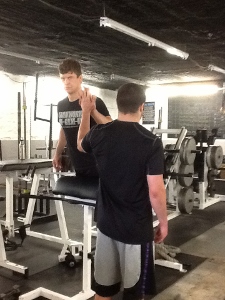 Don’t be ashamed or embarrassed if you need a spotter. It can be a tricky movement for some people.

For example, when my brother first started doing these, he needed a lot of help just to complete 5 reps. Keep in mind that he was deadlifting over 500 pounds at the time, so it’s not like his hamstrings weren’t strong!

Meanwhile, when I had my 62-year-old mother do these for the first time, I only had to help her a little for the first couple weeks before she could perform sets of 10 unassisted reps.

Anyway, now that I’ve gone over the initial things to focus on, here’s how to progress the exercise once you have a good base to work from.

The first way to progress the GHR is simply where you hold your hands.

Holding them across your chest makes the exercise easier.

Whereas placing your hands behind your head makes the exercise slightly more difficult. 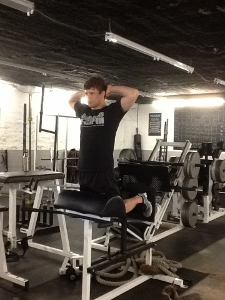 Mastering this version of the GHR is paramount before progression (although that can be said for any of the progressions).

Once your technique is consistent and you’re confident with your ability to perform GHRs with your hands behind your head, you’re ready to move on.

The next progression is to add weight behind your head.

I’d never suggest holding a plate or dumbbell across your chest. I don’t want to get into the biomechanics behind it all so just know that holding the weight behind your head is harder and it’s easier to measure progress.

Here’s a picture of me holding a dumbbell behind my head: 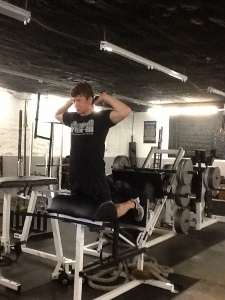 Again, make sure your technique stays consistent and there aren’t any breakdowns as you move up in weight.

Eventually you will become strong enough where holding a dumbbell behind your head becomes a pain in the ass.

That, my friend, is why you are ready for the next progression.

Like I said above, eventually it will become too difficult to hold a dumbbell behind your head (usually once you get to around a 50-pound dumbbell).

It’s at that time that you’ll want to progress to bands:

Although you can measure the band tension, simply keeping track of the bands you’re using and looking to increase the tension you’re using is ultimately what you should be looking to do.

After all, you’re lifting to get stronger, and using more resistance for the same workload is, by definition, getting stronger.