Hip Involvement In Certain Lifts And What It Means For You 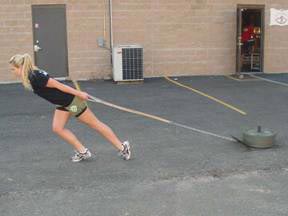 I’m getting right into this post because I want to get back to research.

I recently read a pretty awesome article from the Strength and Conditioning Journal and have been doing a lot of thinking since.

Here are some of the key points/highlights:

What The Research Says:

Each study found that there is an increased contribution of hip extension when compared to knee extension as the intensity increased.

To summarize- your hips are responsible for more force production as exercises get heavier.

“For athletes training with exercises that closely resemble their competitive activities (sprinters sprinting or powerlifters squatting), it is likely that submaximal performances will involve significantly lower hip-to-knee extension moments.”

In order to address this deficit, here’s what they suggest:

1. Add in additional work for the hip extensors.

If you’re looking to do this, read this post- A New Approach To Developing Your Hips.

It helps to explain which exercises will have a better carryover for you based on your specific needs.

Also, be sure to check out this post- Glute Strengthening For Better Performance.

The authors caution that this should be done “to the degree that is possible within the periodized program that the coach considers necessary for the long-term development of the athlete.”

Basically- don’t start maxing out all the time.

One way I’m getting around this is with heavy Prowler pushes and sled drags.

When loaded appropriately you can reach near maximal efforts, but these two exercises won’t leave you “burnt out” like heavy squats and deadlifts do.

At least, that’s what I’ve found so far.

For example, the authors cite a study that found Jump Squats at 42% to produce maximal power at the hips.

Cool Chart Made By My Brother:

Here’s a chart summarizing the research studies reviewed by Bret and Chris. The ratios are hip to knee torque.

Here’s a pic from a couple years ago after a fight I had in Plymouth, Mass. Chris is standing on the left. 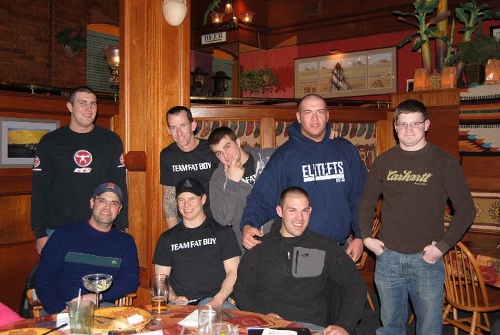 …I know, you’d never guess we were brothers.

What This All Means:

Remember when I started this post saying I wanted to get back to research.

Well, it’s because I want to relearn how to calculate moment arms.

Ultimately I want to be able to draw some stronger conclusions on what this info means specifically for shooting a leg attack.

Until then, here’s what I suggest:

1. Slow drilling is essential to get technique down.

But, once you are comfortable with it, get in some hard shots too.

Remember- this summary of research suggests that performing leg attacks at maximal or near-maximal effort will have a different hip-to-knee ratio.

Therefore, to ensure a better carryover to the mat, some hard, near-maximal shots are important.

To keep things safe (so you’re not slamming your partner on each takedown), consider performing half of the shots without finishes.

2. Follow the suggestions the authors make that I expand on above.

As always, if you have questions leave a comment below or email me at dickie@wrestler-power.com.