The Hip Thrust is the best way to increase glute strength. Because I’ve written a post on it before (Glute Strengthening For Wrestlers), I won’t get into detail as to why that’s important.

But, to summarize that post, it will improve your hip strength and power for wrestling.

However, from what I’ve found by working with wrestlers for so long, the glutes don’t fire very well.

In fact, I had this problem as well. Here are two things I did to get them firing.

First, I performed a lot of Band Hip Abductions. Here’s what I mean.

The glutes fire in two ways. First, they extend the hip (which is what Hip Thrusts train).

Second, they externally rotate the hip (which is what Band Hip Abductions train).

I use this with wrestlers simply because they all “feel” their glutes working when they perform this exercise. And that’s ultimately how you get a muscle “turned on.”

The other exercise I use a lot is a Band Hip Thrust. By the way, bands have been shown in many research studies (including a mini one I did in college) to produce the highest EMG activity in muscles.

Here’s a video of a Band Hip Thrust.

Here’s a picture of how to hook up a band using a carabineer (in case you don’t have a bench with band pegs). 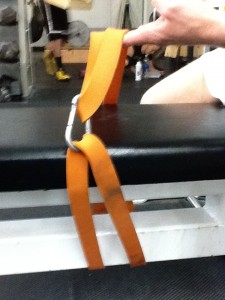 Additionally, as weird as it sounds, I encourage people to hold the exercise at the top and touch their butt. Like I said, this sounds weird. But, the sign that a muscle is firing is that it’s contracted. So, feel for a tight butt. Man, this is getting weird.

But seriously, make sure your butt is tight and your hamstrings aren’t doing the work.

Once your glutes are firing, you can move on to one of two Barbell Hip Thrusts.

Both are great exercises, it’s just easier to get set up to perform the first variation.

As far as technique pointers go, I encourage you to hold each rep at the top for a second or two. Also, make sure you’re feeling your glutes do most, if not all, of the work. That’s the whole purpose of using this exercise in the program.