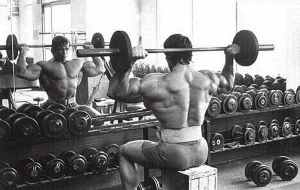 If you’ve ever followed any of the programs I’ve written, you know that there’s a lot of volume with exercises like band pullaparts, face pulls, and Cuban Presses.

However, if I’m not watching carefully, a lot of times the wrestlers I’m training will rush through these.

Even though these exercises are meant to be light, they should be viewed as just as important as a heavy squat or weighted chinup.

While they do not directly contribute to increased force production, they help maintain proper balance within your shoulder.

In fact, they may not seem important to you if you have healthy, pain-free shoulders. However, if you’re banged up, this may be the reason why.

Taking a proactive approach by implementing these exercises in your plan is a great way to ensure your shoulders stay pain and injury free.

“Be proactive, not reactive,” to quote my old man.

So check these 3 exercises out. If you’re not already using them, I suggest that you start working them into your program.

For me, the Band Pullapart is what started it all as far as upper back/rear delt training. They’re super easy to perform and don’t take a lot out of you. This makes it a great exercise to add in without fear of it having a big, negative impact on your strength during other lifts.

Start by taking a double overhand grip on a band. The closer your hands are together, the more tension there will be.

Make adjustments with your grip as you see fit. Just remember- these don’t need to be done with maximum intensity. They’re just being used to help keep your shoulders in balance. Take a page out of a bodybuilder’s book and just feel the burn with these.

Anyway, to perform this exercise, pull the band apart by squeezing your shoulder blades together. Keep your elbows locked throughout.

Once you’ve reached the end of the range of motion feel free to hold the position for a second or two to better activate the rear delts. After that, return back to the starting position in a controlled manner.

As you can see in the video, I’m only using one side of the mini band. It’s not a whole lot of tension, but with the controlled tempo and hold I’m getting plenty of activation through my rear delts.

Ultimately, that’s all you should be looking to accomplish- activation in order to get a pump.

The Face Pull is another great exercise to add in to your program. It too does a great job of strengthening and balancing out your upper back without taking a whole lot of strength/effort.

Face Pulls can be performed on a cable machine or you can use a band.

In terms of activation, you’ll definitely get your rear delts/upper back firing more with a band. Since that’s the primary focus, opt for a band at least half of the time.

Anyway, here’s a video of me demonstrating the Face Pull:

Notice the hold that I use with each rep. It’s not super long, but you should consider using some kind of hold. Again, it’s just another way to increase the total time under tension of your upper back.

Like I mentioned earlier, it’s important to keep in mind why you’re performing these exercises. The primary objective is to maintain good balance in your shoulders so that they remain pain and injury free.

What I’m trying to say is avoid doing this:

If you ever see someone doing Face Pulls like this, just let them be. It’s obviously very important to them that they have the highest Face Pull in the gym.

And who wouldn’t want that?

I mean, I get asked all the time how much I Face Pull!

In the past, I had wrestlers I train perform Cuban Presses like this:

I’ve since cut some parts out and just have the guys do this:

I don’t think the full Cuban Press in the first video is bad. I just don’t know how important the first and last parts are in the grand scheme of things.

I’m not really sure what the first part even does other than get you into position to externally rotate the dumbbells and the press at the end isn’t worth the time, in my opinion.

Unless you’re rehabbing from an injury or surgery, I don’t really know if a few overhead presses with 5-pound dumbbells will really benefit you.

Besides, the purpose of the exercise is to externally rotate at the shoulders. So why not just put the entire focus on that?

So anyway, that’s why I decided to eliminate a couple steps.

…I’m not really sure why I wrote that title. I just decided to add in another, less frequently used upper back exercise that I just thought of.

Although I don’t use them as much (and I’m not sure why, it’s a great exercise), I also have the wrestlers I train perform DB Cleans.

Here’s a quick video of this two part movement:

It’s really just another way to go about performing a Cuban Press.

Anyway, I like those too, so give them a shot.

My buddy, Donnie Vinson (3rd at NCAAs in 2012), battled with shoulder pain throughout his college career. And while he doesn’t make excuses about it, I know it affected his ability to perform at his best.

He’s since had surgery and is rehabbing successfully. And while his future should be pain-free, unfortunately the competitive portion of his career was not.

Ultimately, isn’t that why you read my blog?

You want to perform at your best, right?

So control that which you can control and do your best to keep your shoulders in balance.

Even though these exercises are not prime time strength builders, they are essential to maintaining proper balance.

So if you’re not, start working them in to your program today. And if you ever feel overwhelmed with everything I cover in my posts, just shoot me an email and we can talk about a personalized plan.