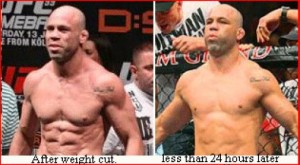 If you read the post I put up last week on cutting weight (if you haven’t click here to read it) then you know that losing fat free mass (muscle) during the season is pretty much a given.

And why wouldn’t it be??

When you cut weight you’re on a very low calorie diet and you’re exercising hard. This isn’t exactly the formula used by top bodybuilders, or anyone for that matter, looking to gain or maintain muscle.

But what if I told you that I had a miracle cure proven to help you maintain muscle during the season?

Well, my friend, I do and it’s called knowledge. Now let me hit you with some!

“The purpose of this study was to examine the effectiveness of B-alanine as an ergogenic aid in test of anaerobic power output after 8 weeks of high-intensity interval, repeated sprint, and resistance training in previously trained collegiate wrestlers and football players.”

22 wrestlers (I’m assuming from D2 school Adams State College in Colorado). 12 were given a placebo and 10 were given the supplement. The capsules were exactly alike except for the contents.

This was a double-blind study so both the researchers and the athletes were not aware of which wrestlers were taking what. This type of study is seen as the most reputable.

The wrestlers were instructed to take half the dose (2 grams) in the morning with breakfast and the other half at lunch. Additionally, they were told to eat their usual diet and not take any other supplements.

The wrestlers kept a diet log which was then used to determine caloric intake.

The wrestlers taking the placebo consumed an average of 1,688 cals/day. The average protein intake was .79g/kg body weight.

The wrestlers taking the B-alanine consumed an average of 2,210 cals/day. The average protein intake was .76g/kg body weight.

Both were categorized by the researchers as “low calorie” considering the high workload on the wrestlers.

4-5 wrestling practices along with 3 lifting sessions each week.

The lifting was a circuit. The wrestlers used varying work to rest ratios of 1:2 to 1:4 throughout the season.

From what I gathered from the study the lifts were pretty basic, and actually incorporated quite a few single-joint, machine lifts. In a nutshell, it was a less than ideal lifting program, in my opinion.

Both groups of wrestlers lost body fat and body weight during the 8 weeks.

The placebo group lost an average of .98 pounds in lean mass.

The group taking B-alanine increased lean mass by an average of 1.1 pounds.

There were other basic tests run in this study to see the effects of various physical qualities. However, I was mostly concerned with the effects on lean mass.

Here’s what the researchers concluded on the other tests- “The subjects taking B-alanine achieved more desirable results in all tests (average values) compared to those on placebo.”

Kern, B. T. Robinson. Effects of b-alanine supplementation on performance and body composition in collegiate wrestlers and football players. Journal of Strength and Conditioning Research. 25(7), 1804-1815. 2011.

I really think the above info speaks for itself. However, if you have any questions just leave me a comment below or shoot me an email at dickie@wrestler-power.com.

Additionally, for what it’s worth, the researchers stated that although the supplements used in the study were donated, they received no funding and they do not have competing interests with any supplement company.

Your Ultimate Guide To Recovery

What To Eat The Day Before Weigh-Ins