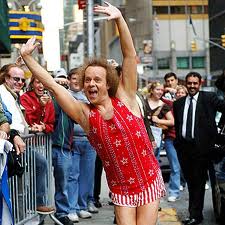 …Fact- I was actually a “bodyguard” for Richard Simmons with some other wrestlers when he came to Ithaca College.

Anyway, maximizing your conditioning for wrestling is of the utmost importance. This is especially important as you reach the end of the year.

If you are anything like me those last couple months consisted of extra runs, lots of jumping rope, and riding a stationary bike (usually in front of a heater of some kind). It was all steady state, long duration cardio. I primarily did it to keep my weight in check.

However, with so much information out there, this can get confusing.

There are “hardcore” CrossFit workouts.

There are various circuits and other workout “finishers.”

There are programs that have you perform bodyweight exercises for 6 straight minutes.

Listen, I’m not here to say those things are bad.

But I think there is a need to separate “what’s hard” with “what’s effective.”

Too often coaches and wrestlers think getting in shape is all about just pushing harder and harder each day. To a certain extent, I buy into this philosophy.

However, sometimes I feel like following a scientifically proven system oftentimes gets thrown to the wayside in favor of this philosophy.

Now, I’m no science geek or Ph.D candidate, but I do think there’s value in knowing what the research suggests. You can then determine if the conclusions/methodologies will fit into your program.

So, I’d like to introduce 2 of the methods I’m currently using with the wrestlers I train. These 2 methods are specifically designed to help them peak their conditioning for the end of the season.

Both of these methods are covered in much greater detail in Joel Jamieson’s book, Ultimate MMA Conditioning. For the average person, his book is a little heavy on the science side of things. However, in my opinion, it’s the best book I’ve found on how to maximize your conditioning.

By the way, I am not receiving any compensation for promoting and/or linking to Joel’s blog. I’ve never even spoken to or met Joel. But I do read his blog regularly and buy his products.

This method is used to increase how much power your lactic system can produce.

Why is this important?

Joel states in his book that the more power you can generate from your lactic system, the harder you’ll be able to go in high intensity scramble situations. Additionally, the greater capacity enables you to maintain lactic energy production for longer periods before getting fatigued.

Specifically, the LPI method stimulates an increase in the enzymes involved in anaerobic glycolysis. In addition, this method promotes the shift of your metabolism to rely more on anerobic energy production.

As with any other training method used to develop power, a maximal effort is required on each set to realize the full benefits.

He recommends each rep lasting somewhere between 20-40 seconds.

3 reps should be performed per set. Each rep should be followed by a rest period that is determined by a drop in heart rate. You should look to be between 110-130 beats per minute before starting your next rep.

You should then take a break of 8-15 minutes to perform light exercise- jogging, jumping rope, light bodyweight exercises, etc.

These should be performed once or twice a week.

I have them use rowing machines.

2 sets of 3 reps. Each rep consists of a 20-second bursts with a 35-second break. I only have one heart rate monitor, so to keep it fair, I just control the rest period with a stop watch.

If you don’t have a heart rate monitor, there’s a way to see how you’re recovering. Monitor the distance covered with each 20-second burst. If there’s a sharp decrease (>5%) between the first and third, it means you need more recovery time.

If you are able to produce the same distance covered in each of the 20-second bursts, you’re ready for the next progression (Week 2).

2 days worth of the “prescription” above.

Oh, by the way, I usually leave between 8-10 minutes between sets for a break. I have the guys rotate through a bodyweight circuit of 3 exercises.

The guys who I train who are in solid shape can get through 4-5 rounds in 8-10 minutes. I start the “rest” clock as soon as the last row is done. The ones who are not in as good of shape usually get through about 3 rounds.

1-2 days worth (depending on my use of the next method) of 2 sets of 3 reps. Use 23-second bursts with a 32ish second break. Basically I try to increase the difficulty by 5-7 seconds. I either add time to the effort portion, subtract time from the rest portion, or use a combination of the two.

Again, measure the distance being covered with each effort to ensure that there is adequate recovery. If you’re not rowing, find some way to measure your output. That’s ultimately how you’re going to measure adaptation to the method and know when it’s time to progress the difficulty.

Same type of progression as week 3.

If the output is consistent in week 3, look to adjust the difficulty by 5-7 seconds.

Again, 1-2 days worth depending on how you decide to implement the next method.

This method is used to train your ability to maintain a high level of repeated explosiveness. This is a must for ensuring you’re explosive in the second and third periods.

Ultimately what occurs at a physiological level is an increase in enzymes involved in lactic ATP production. Additionally, your body improves buffering mechanisms which improve lactic capacity.

Joel recommends 1-2 sessions a week, 6-10 sets per series, and 1-3 series per workout. Additionally, he suggests taking 8-10 minutes of active rest between each series.

This is where the Battling Ropes come into play. For those who don’t have access to these he suggests various jumps, sprints, explosive pushups or other bodyweight exercises. 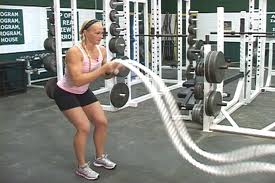 Anyway, just like in the first method, I look to progress a wrestler by adding work time, subtracting rest time, and/or increasing the total sets done per series.

Count the reps performed during the first 12-second round. Aim to reproduce the same number of reps (within 3 or so) on each subsequent set.

If I remember correctly, a 5% decrease is considered statistically significant. So, if you find that your reps are down by more than 5% from the first set to the last, then add more rest time, subtract from the work time, or shave off a couple sets.

Or if you don’t want to worry about percentages just count or listen. You’ll hear/see the ropes decreasing in speed pretty abruptly. If this happens, back off a little, or just repeat the same workout the next time you’re scheduled to use this method.

Similar circuits like the one I detailed above are great to do in between. Jogging, riding a stationary bike, and jumping rope work well too. However, I prefer to get in some moderate strength training.

**Remember, before you progress to the next week, make sure that you show adaptation at the previous stage. Specifically, be sure your reps are consistent from set to set and series to series and there isn’t a noticeable dip in your power output.

I’m not trying steer you away from following and implementing hard workouts.

What I am trying to do is give you some tools to help you better measure and progress. Ultimately, this will help ensure that you’re as optimally prepared as you can be for the end of the season.

Getting beat on while you’re sucking wind is not how you want to finish up, right?

Well, then take the info I covered and put together a solid program to help peak your conditioning. It’s probably a better plan than going onto a random website and selecting something that looks like it’ll be a challenging workout for the day.