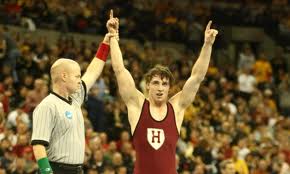 I shot the video at my first gym. It was located in a small space at a wrestling club. Since then I’ve been able to grow and expand to the 5,000 square foot facility which my wife and I named Ironworks Gym. If you live around the greater Binghamton area, check out the virtual tour on the site. If you’re interested in a membership and/or training with me, shoot me an email at dickie@wrestler-power.com.

Anyway, back to Mr. O’Connor, his crazy pulling strength, and the story of how we started working together…

For those who don’t know, J.P. was the first wrestler I started working with. His high school coach used to be my coach back when I was in high school.

I started writing his programs when I was still at Ithaca College (he was in 10th grade). I even met with him a time or two at the YMCA in Norwich to work with him.

However, it wasn’t until I graduated in 2006 that we were finally able to work together consistently. This happened to be the summer of his senior year before he left for Harvard.

I still remember parts of the first training session he did with me. In fact, I’ll never forget this moment…

He was about a third into the workout when he blurted out, “Holy shit, Dickie.”

I asked him what he meant.

His response- “I had no idea this is what you wanted me lifting like.” He was referring to the intensity of the workout.

It was kind of puzzling to me when I thought about it.

It’s not like I was yelling or screaming at him. I wasn’t making him move at a fast pace either.

All I was really doing was having him add weight so long as he showed good technique with the last set.

However, he obviously wasn’t used to doing this with the programs I was sending him.

He ended up getting 8 weeks of training in with 3 sessions a week before he left for Harvard.

He also provided me with one of the best testimonials I’ve ever received. Here’s a part of it:

“I attribute my hard work under his guidance as being a critical part of my success, not only on the high school level, but also in my first year of college at the NCAA division one level.”

Well, now that the story is out of the way, let’s get into weighted chinups.

In all honesty, although I have trained lots of wrestlers who have been able to work up to 100 or more pounds for 3 reps in the weighted chinup, I have yet to discover a predictable program to achieve it.

From what I’ve found, it’s just a matter of working hard week in and week out.

As basic as that sounds, as you can see from above, it certainly gets the job done.

Here’s a pretty simple way to approach working weighted chins into your program by Jim Wendler.

Questions? Leave me a comment below or email me at dickie@wrestler-power.com

A Valuable Lesson From Bodybuilders

Kid Dynamite At It Again!