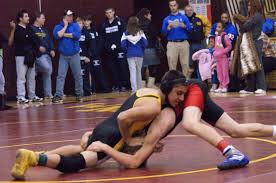 Having a strong, effective sprawl is essential to being a successful wrestler.

And to complement your technique, you’ll be happy to find out that there are certain exercises that will help improve the force you produce when sprawling.

Because I’ve written in greater detail in this post, I won’t get into the intricacies today.

Additionally, I’ve detailed a version of the exercise below in this post. I also cover the benefits of it in that post.

So instead of rehashing old topics, I’d like to introduce another exercise option if you’re looking to increase the strength of your sprawl and don’t have access to a horizontal back extension machine.

The bent leg version is shown in research (see reference below) to produce more glute activity when compared to the straight leg version. However, from a functional standpoint, I feel as though this version will have a better carryover to sprawling.

Here are a couple of pictures to show you the straight leg hip thrust: 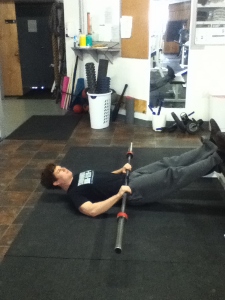 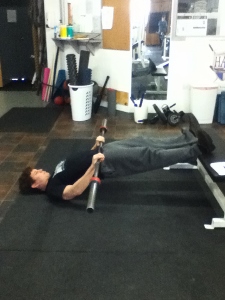 The reason I feel this exercise will have such a positive carryover to your sprawl is because of the way you’re using your hips.

Yes, in order to perform this exercise, you’ll be lying on your back.

However, you’re firing your glutes to drive your hips forward, just as you would in a sprawl situation. This makes me confident that the straight leg hip thrust will have a positive carryover to the force and overall effectiveness of your sprawl.

So, if you’re looking for an exercise to use that will improve the force you produce when sprawling (and you don’t have access to a horizontal back extension), then I highly suggest you try the straight leg hip thrust in your training program.

If you have any questions on this exercise or other ways to improve your sprawl, leave me a comment below.

A New Take On Hip Power For Wrestling