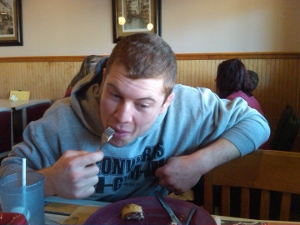 …when I’m not busy eating my brother’s leftovers, I’m pretty good at thinking…sometimes.

Anyway, if you’ve been reading my blog over the last few of months, you’ve seen a shift in my posts. More and more I’ve been trying to support my posts with research.

Unfortunately I’ve started running out of wrestling-specific research to incorporate. There just isn’t a whole lot out there.

For instance, a few weeks ago I purchased a product that details over 300 of the most relevant studies pertaining to sprinting. You would not believe the studies out there dealing with increasing sprinting speed and jumping ability.

This information is great for team sport athletes. Unfortunately, due to the unique demands of the sport, the research is not directly specific to wrestlers.

So that got me thinking…

And I began to realize that strength coaches who work with wrestlers (like me), are designing plans under the assumption that they will improve performance.

We know performance in the weight room is improving through the increases in strength and power.

But do we really know that increasing a squat, a clean, or any other exercise will transfer over to specific wrestling skills?

For instance, do we know improving those lifts will increase shot speed?

What about getting off the bottom?

Or how about mat return power?

All there is to go on is feedback from the wrestler and looking at their record.

But there is no solid data that says “do xyz program and you will see, on average, x% increase in shot speed, force produced when finishing a shot, etc.”

Well, my friends, that’s all about to change.

Starting this week I’ll officially be using a Tendo Unit to test the effectiveness of the programs I use with wrestlers.

However, now I’ll be designing and testing programs specifically aimed at increasing qualities like shot speed.

To my knowledge, this will be the first time anything like this has ever been done. I’m really excited and fortunate to have such committed wrestlers to help with the project.

What The Tendo Does

Essentially a Tendo Unit is a small computer designed to measure velocity and power.

Normally it’s used to measure bar speed during a specific exercise and the power generated.

Here’s a quick video showing how it’s been traditionally used:

I’ve known about the Tendo Unit for a number of years, but it wasn’t until recently that I started wondering why no one (to my knowledge) has ever hooked it up to a person. More specifically, to a wrestler to measure the speed and force of their specific movements like a leg attack.

So, after gauging the interest level of the wrestlers I work with, I have officially started to put things in motion.

To give you a better idea of how I’ll be using the Tendo Unit with wrestlers, here’s a quick video demonstrating the setup.

Of the 6 shots he took, his best numbers were:

Now, through data collection over the next few months/years I’ll have a much better understanding of how to address specific need. For instance, I’ll have the knowledge to design programs to deal with situations like “Dickie, I need to improve my shot speed” or “Dickie, I’m getting in on shots but don’t have the horsepower to finish.”

Ultimately, my thought is that by testing wrestlers with the Tendo, I will better understand what components of their program are contributing to actual improvements in specific wrestling situations.

The first phase of the testing that I’ll be conducting is simply measuring the shot speed and power.

From there, I’ll use that information to compare how each wrestler performs in various tests (squat, deadlift, sprint, vertical jump, etc.).

The goal of this first phase is to get a basic understanding of what fast and explosive wrestlers do better than slower ones.

Can they sprint faster? If so, then I’ll have at least an initial direction on how to design programs to increase shot speed.

Maybe, because the movements are so much different from a sprint or a jump, that there isn’t a direct correlation that will initially stand out.

I’m really not sure what the first phase of testing will produce. Either way, I’m confident that as time and trials continue, I’ll be able to gain a much better understanding on how a training program should be structured to develop specific qualities for wrestlers.

It’s been a little while since I wrote this post.

Click here to read about the findings and conclusions.

To read about my favorite lower body exercises for strength and power read- Lifting Program for Wrestlers.