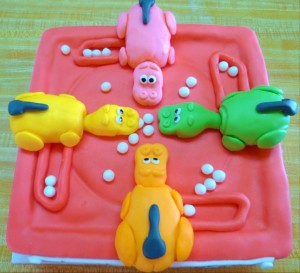 One of the most common ways to condition for wrestling is through interval training.

So, just like I have in the last couple posts, this week I thought I’d simply present to you another paper on the subject matter.

As you know, while I am a believer in the style of training I preach, I definitely know that there are other methods out there. On top of that, I’ve been open to other beliefs and ideas. As a result, I always like to present as many sides to a situation as I can.

If you’re not familiar with some of my preferred ways to get in shape check out the “Related Posts” section below.

Anyway, on to today’s paper…

The Use Of Interval Training To Condition For Wrestling

The authors begin by stating the obvious- in order to increase their chances of success, a wrestler must have the necessary conditioning to attack throughout the match.

Specifically, anaerobic conditioning is needed for repeated explosive attacks for both offensive and defensive moves.

To effectively design a conditioning program, one should first start with a needs analysis.

The authors state that the primary energy system, which accounts for 90% of the energy produced, is the phosphagen and lactic acid systems. The aerobic/oxidative system, according to the authors, accounts for only 10%.

I don’t agree with this 90/10 assessment (primarily based on the VO2 maxes found in the studies I cover in this post). However, I do think that both the anaerobic and aerobic systems are important for maximizing your potential as a wrestler.

The authors feel that some coaches can forget about the rule of specificity. The example they provide is that jogging is commonly used to build an aerobic base. However, in terms of specificity, it’s not the best option because it primarily develops slow twitch (ST) fibers.

ST fibers do not contribute a whole lot during key explosive events (takedowns, scrambles, etc.) in a wrestling match. Therefore, the authors feel that they don’t need to be developed as much as fast twitch (FT) fibers.

“It has been established that ST motor units are smaller, generate less force, and reach peak tension at a slow rate compared to fast-twitch (FT) motor units.”

The authors state that as the intensity of the power output increases, there is an equal increase in the number of FT fibers that are recruited.

Therefore, the researchers believe that proper conditioning of FT fibers will better enable wrestlers to increase their success ratio during scrambles and other explosive efforts throughout a match.

“The FT muscle fibers can best be conditioned through anaerobic training. One way to condition the anaerobic energy system, and consequently the FT fibers, is with an interval running program.”

Here is the interval program they suggest:

The authors suggest that manipulating the work-to-rest ratio is a great way to challenge and develop FT fibers.

Interval training has been shown in research to increase resting levels of ATP, phosphocreatine, glycogen and anaerobic enzymes.

Intervals are also effective at increasing the buffering capacity of the body.

Further development of anaerobic power and capacity is achieved by limiting rest. This prevents full recovery between the sprints (or other explosive bouts, depending on what you’re doing).

Past research cited by the authors of this paper suggest that utilizing a 1:3 or 1:2 work-to-rest ratio is best for developing FT fibers.