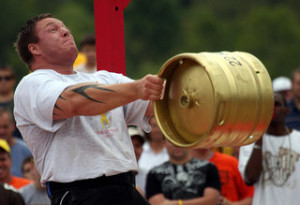 Kegs are a versatile tool to use in a wrestling strength and conditioning program.

They require a lot of stability and build reactive strength because of it.

Additionally, the exercises below will build tremendous strength in your grip, shoulders, and core. These 3 areas must be strong if you want to maximize your potential on the mat.

These 3 exercises detailed below are excerpts from my Strongman For Wrestling eBook. This eBook is part of all 3 of the program packages offered on my site. For more info check out my Training Programs page.

Setup: Lay the keg on its side and take an athletic stance in front of it. Take your grip on either side of the keg and then lower your hips and arch your back. Lift the keg up to your hips while bending at the knees, hips, and elbows to position the keg as tight against your hips as possible.

Execution: Once you are standing fully locked out and in control of the keg, begin to walk forward at as fast of a pace as possible. Walk for the desired distance and return the keg to the ground under control. One thing you should avoid while performing a Keg Carry is pushing yourself too far. Normally I would encourage you to do this, but don’t try to squeeze out an extra step or two if it means possibly losing your grip and dropping the keg on your feet. A broken foot (or any injury for that matter) will not help you reach your goals, so always remember to keep things safe no matter how bad you want to break your records.

Wrestler Usage: The Keg Carry develops an unbelievably strong and stable core which will help you stay in better position when you’re in on shots and your opponent is trying to sprawl on you. Good balance and core stability are the two components that prevent you from losing good position here, so developing these attributes with exercises like the Farmer’s Walk will keep you in better position to score. Additionally, the Keg Carry develops a well conditioned and resistant grip and I think we all know the importance of having a strong grip for wrestling.

Setup: Lay the keg on its side and take an athletic stance in front of it. Take your grip on either side of the keg and then lower your hips and arch your back. Lift the keg up to your hips while bending at the knees, hips, and elbows to position the keg as tight against your hips as possible. Clean the keg so that it is in the rack position.

Execution: Drive your hips backward and bend at your knees as you lower yourself into a quarter squat. Once you have reached the bottom of your quarter squat, powerfully drive back up as you attempt to jump off the ground with the keg. At the peak of your jump (just before your toes leave the ground) begin to press the keg over your head. As you begin to press lean back slightly so as to prevent the keg from hitting your chin as you press it overhead. Once the keg has cleared your head lock it out overhead. As soon as you have stabilized the keg (this may take a while), return it to the rack position and repeat for reps. Much like the Keg Clean, or any explosive lift for that matter, your focus should be on moving the keg from point A to point B as violently and explosively as possible while simultaneously maintaining control of it.

Wrestler Usage: The Keg Push Press is another great way to develop lower body power as well as coordination and stabilization throughout the body. Much like Keg Clean, the leg and hip power as well as the full body stabilization needed to successfully complete Keg Push Press are going to carry over to nearly every position on the wrestling mat. The shoulder stability developed at lockout will also help to build injury resistant shoulders which will help keep you on the mat longer because who really wants their career cut short due to injuries?!?!

Setup: Take an athletic stance in front of the keg. Angle the keg away from you slightly and squat down so that your chest is against its side. Grab around the keg with both arms and lock your hands together around the middle of the keg. Your feet should be flat on the ground and your back should be arched. If you’re having trouble getting into the proper starting position as some of my larger and less flexible wrestlers sometimes do, put the keg on top of something (I use small boxes that I built with 2x4s and plywood). It usually doesn’t take a major increase in height, but it’s sometimes necessary to get into the proper starting position.

Execution: While squeezing the keg as hard as you can, stand straight up with it as though you were going to back arch with it. Throw your hips through hard at the top and then return it back to the ground under control. Repeat for reps making sure to re-arch your back to the best of your ability before starting each rep.

Wrestler Usage: The Keg Lift builds the functional strength needed to help you in a number of places on the mat. First, it will help you with your mat returns as it will strengthen the muscles in nearly the exact way they need to be to ensure optimal returns to the mat. The hip power needed to finish the exercise will translate into more explosive takedowns, sprawls and throws as well. Additionally, this exercise will help you in Freestyle and especially Greco by strengthening you in the right places to score more straight lifts and belly to backs. With a 5-point throw being a period ending move now, investing time into strengthening yourself to better perform this technique will pay huge dividends.

How To Get Kegs

One of the local beer store owners comes to my gym, so we simply did a pay-in-trade for a membership. I’m sure any local store owner would sell you an empty shell for whatever the deposit is (it’s currently $30 in New York).

I suggest getting Budweiser kegs because they are fairly symmetrical. The Coors kegs are wider in the center and more narrow on the top and bottom.

Click Here to learn how to depressurize and fill kegs.