A little piece of trivia for everyone- back in the day (when he was representing Section 4 at the NYS Championships) he was known as “Duck” or “Dakey Duck”.

In fact, here’s a great example of Kyle being Kyle back when he was a senior at Lansing High School (start the video at about 2:15).

This was shot by my wife, Laura, back in mid-March of 2009. It was during the first weekend of work at what is now Ironworks Gym:

Anyway, whatever you call him, Kyle Dake had another impressive outing this past weekend. Although he didn’t come away with 1st place, he did manage to take out a 2-time World Champ in the quarterfinals.

For those who haven’t seen the match, check it out below…

As a performance coach for wrestlers, I tend to watch matches differently. Believe me, I still get on the edge of my seat and am always impressed by the displays of awe-inspiring techniqu. But I also look for common situations that may be improved through training in the weight room.

In the match above, there is one particular position that really caught my eye and got me thinking. Specifically, I was drawn to the importance of ankle control in preventing the other guy from scoring when he’s in on a shot.

Both Kyle and his opponent went to this seated position almost immediately when the other guy got in on a leg attack.

Obviously scoring in this position takes a lot of technique and experience.

However, I thought of one exercise that would increase your chances of scoring, or at least not giving up a takedown, in this pivotal situation.

Before I get into the specific exercise, I’d first like to cover what I look at while evaluating a situation in wrestling.

1. Joint angles- the defensive wrestler is in a seated position.

2. Direction of movement- the hand that’s grabbing the opponent’s foot is pulling in a horizontal direction.

3. Movement speed- this is more of a strength position due to the slower speed. Both maximal strength and static strength are needed to ensure you can hold on to the foot and pull yourself around your opponent to get the takedown.

Based on my evaluation, I can start to consider what exercise(s) may have the best carryover.

And based on my quick breakdown, this is what I think would be most beneficial to increase your chances of scoring from this position:

I tend to favor pulling exercises that work both arms at the same time. This is primarily because more often than not that’s how your body will be working on the mat. Examples include controlling a 2-on-1, pulling in a body lock or front head lock, pulling in a leg after a shot, and during a gut wrench in Freestyle and Greco.

However, in this case it seems as though training one arm at a time would better.

Additionally, I like the seated position. Again, it better simulates the position from the match above.

Finally, the last thing I would add to this would be some kind of a fat grip. I have Fat Gripz at my gym and have used Grip4orce before. Both are fine here.

If you don’t have access to either, wrap a small towel around the handle to increase the thickness. In all honesty, anything really works as long as it increases the thickness of what you’re grabbing on.

To make this even more specific to the situation, use a “thumbless” grip, which seems to be the grip used by both guys in the video above. 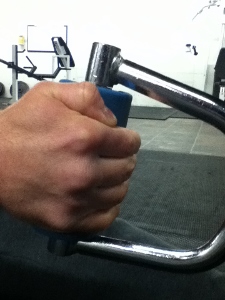 Additionally, consider adding holds to this exercise to make it more specific. For more on information on static strength development for wrestling read this post.

In terms of specificity, I’d suggest adding the hold about halfway between the start and finish of the exercise. This will better simulate the angle of the arm during most of the situations above.

Another potential exercise that has direct carryover would be a Single Arm Bodyweight Row. By the way, be sure to read my post on bodyweight rows and download a free copy of my Suspension Straps eBook.

Here’s the standing version (Progression 1 from the post linked to above):

And here’s one way to make the exercise more difficult.

You may be thinking that this row variation isn’t as specific because you’re not performing it in a seated position.

However, the one big benefit this variation has over the cable version above is that it’s a closed chain exercise.

I don’t want to go into a big scientific breakdown of closed versus open chain exercises today. In a nutshell, the fact that the bodyweight row is closed chain makes it more functional.

Because in the situation above the ultimate objective is to hold on to your opponent’s foot and pull yourself around him to get the takedown.

The Single Arm Bodyweight Row is training you to pull your body around a fixed point.

Whatever you choose is up to you. In all honesty, it’s oftentimes determined by what equipment you have access to.

But either way, you can’t go wrong with trying these two rowing variations. These would be especially helpful if you often find yourself in the seated position above.

Anyway, I hope this post helps you with this specific situation. I hope it’s equally helpful in demonstrating how to better approach exercise selection for wrestling.

Do you have questions about this situation or another that you find yourself constantly in when wrestling?

If so, leave me a comment below and I’ll get back to you.

The Most Difficult Program I’ve Ever Designed