The Most Difficult Program I’ve Ever Designed

…To the right is a picture of Kyle Dake lifting and carrying a 225-pound keg. This photo was taken back when he was a senior in high school.

Anyway, last week I was challenged more than I have been in a long time. This happened during the design process of a program for Kyle Dake for the World Team Trials.

One of the reasons I found this challenging was simply because of who it was for. I’ve always heard from top strength coaches that working with high level athletes can be very work-intensive and somewhat stressful at times.

It turns out, they weren’t lying!

What makes it so stressful?

When you get to such a high level, success and failure is often determined by very small percentages. In the case of a wrestling match it can oftentimes come down to a takedown. And at the International level, the takedown is scored by the wrestler who happened to be half a step faster.

I am always selective and precise with my exercise, set, and rep scheme progressions with the programs I write. However, this particular program was obviously more of a hair pulling situation.

Additionally, I found it to involve a lot more thinking on my part. This was primarily due to some of the situations that he was looking to improve. Some were strength related, which I’m very confident in developing and programming for. However, a lot were power/speed related which I found to be more challenging.

Don’t get me wrong- developing power and speed in wrestlers isn’t an issue. I’ve done a lot of research on the topic. However, I have a lot more experience improving these qualities in wrestlers who aren’t already super strong.

Due to a lack of lower body strength, weaker wrestlers are unable to produce a lot of force. Regardless of how fast they can produce force, they don’t produce much of it.

Therefore, when looking to develop and maximize speed/power, I first look to develop a wrestler’s ability to produce force.

For instance, in my last post, Maximizing Your Power Output (Without Power Cleans), I detailed Jump Deadlifts and the percentages that have been demonstrated by research to maximize power output.

Based on that post here are examples of two wrestlers:

Therefore, the training weight is 40 pounds (based on the 40% found in one of the studies). This is actually 10 pounds less than a standard Trap Bar. But regardless, this wrestler is maximizing their power output at 40 pounds.

This wrestler’s training weight is 160 pounds. This means that this wrestler is explosively moving 160 pounds on a regular basis.

Who do you think has the greater potential to produce more power on the mat?

That’s why I focus on developing force before looking to increase the speed at which it’s executed.

However, in the case of Kyle, who gets commentators to regularly comment about how strong he is, how muscular he looks, etc., special considerations must be made. 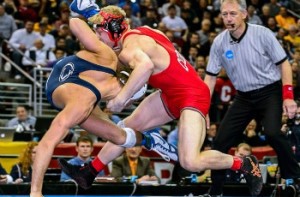 …Between seeing the muscularity in his legs and the force he can generate when finishing a takedown and/or mat return, it’s easy to tell that from a strength standpoint, he’s good to go.

So what does that mean in terms of exercise prescription? Specifically, when some of his goals of the program are to improve:

1. “Forward leaning chopping steps (driving through a double leg or a single leg).”

2. “Low to high exploding through and forward (double legs from the knees and low stance).”

Well, let me tell you…

By the way, if you want me to design a program for you like I’ve done many times for Kyle, check out my Personalized Programs page to get started.

I’ve already written about how to use the Prowler for power production so I won’t restate anything here.

Instead, check out the post The Missing Link In Your Program.

And check out some of the findings of my research- 2 Proven Ways To Shoot Faster.

One exercise that’s commonly used to maximize Rate of Force Development is Depth Jumps. They are specifically used to minimize ground contact time.

A word of caution before I continue- in basically any text I’ve read on Depth Jumps, it’s recommended that a squat of 1.5-2x bodyweight is achieved before using this type of jump.

This is a recommendation to prevent injury.

However, I don’t think it needs to be followed to the “T” here.

For wrestlers, I don’t think performing Depth Jumps from a high surface (which increases the risk of injury due to the higher impact of the landing) is needed.

In basketball or volleyball there are times that you’ll land after a maximal jump and then need to immediately jump again.

However, in wrestling, the pre-load on your muscles comes from stringing a couple shots together or firing off a re-shot. As a result, the forces acting on your body are not as high as they would be if you were to drop from a 30-inch box.

So, for that reason, I’d say 10-15 inches is all a wrestler should use when implementing Depth Jumps. If you’re just starting out use 5 inches or so.

The lower height reduces the force that travels through your body upon landing. It makes it more specific to wrestling and reduces the risk of injury.

Again, keep in mind that for wrestlers without a thorough strength training background, their time is better spent training their body to develop force. It doesn’t matter how quickly you can develop force if you’re producing minimal amounts to begin with.

The primary reason to start working Low Depth Jumps into your program is to train your body to maximize speed.

Therefore, the big focus to keep in mind when performing these jumps is to minimize ground contact time (the time you spend on the ground between the landing and the jump).

The quicker you can get off the ground, the faster you’re producing force.

The second big thing to focus on is distance covered.

Again, like I mention above, it doesn’t matter how quickly you can get off the ground, if you’re producing minimal force (you’re not jumping far).

2 research papers cited in High-Powered Plyometrics suggest that if you’re not able to achieve a greater distance in a Depth Jump when compared to a standard jump, that you’re either:

1. Performing the Depth Jump from too high a surface.

2. Or you are not producing enough force (and should focus on strength training).

**Quick note- I have the wrestlers I work with look to match the distance between the two jumps. If they can Depth Jump as far as a Seated or Standing Horizontal Jump, the height they’re dropping from is fine.

In a nutshell, give this a shot:

If the distance you covered in the standing long jump is more than the distance from the Depth Jump, your program should focus on bringing up your leg strength.

If, however, you are able to cover the same or more distance during the Depth Jump, then it suggests 2 things:

1. Your strength is good enough.

2. You’re jumping from a good height.

If you do find your Depth Jump to cover more distance, don’t feel like you need to progress the height of the box. Again, keep in mind that in wrestling your body doesn’t need to react to high forces that are associated with landing from a tall box.

Instead, your time would be better spent working at that height and looking to increase the distance you cover with both jumps.

By increasing the distance of your jumps you’ll know that you’re improving your body’s ability to generate even more force very quickly upon loading it. Ultimately, I have found this to have a positive carryover to situations like faking a shot before shooting and other situations Kyle wanted to improve.

I hope my latest program design experience provides you with a better understanding of one of the types of explosive training that wrestlers will benefit from.

And if you’re ready to improve your strength and power for wrestling, be sure to check out my program store: