Low Back Strength for Wrestling 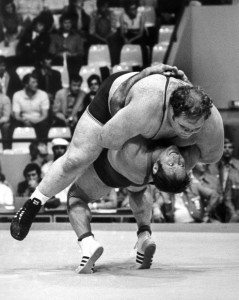 A few nights ago I was talking to my good pal and former college teammate, Keenan “KC” Beach. He had taken some time to review my Strongman for Wrestling Training System and told me that he thought it was fantastic.

He did express to me one concern though- the low back health of his wrestlers while performing some of the exercises. Keeping your low back pain free has almost become an obsession in this country and there are tons of “fixes” that you can buy.

While I’m not looking to put out the next quick fix, I do have some opinions on the matter that I thought I’d share with you.

But before I get into them, I want to first build some credibility by showing the kind of back strength I’ve been able to develop over the years.

The video below is of my recent 305 pound paused SSB Good Morning with 70 pounds of chain added. I decided to film it exclusively for the purpose of kicking off this post. And, of course, to attract some funny comments from all the pencil necks out there about how my back is going to snap in half.

Guess what? I’ll be 27 in October and have yet to have a back injury of any kind. This past December I deadlifted an all time high 625 at about 195 pounds (you can check that out on my personal Facebook account).

I do “stupid shit” like this all the time. In fact, I actually nicknamed this exercise the “Stupid Kid” exercise a few months ago when I first started experimenting with it.

Dispelling The Myths Of Rounded Back Lifting

The first one is of professional MMA fighter, Tamdan “The Barn Cat” McCrory, deadlifting. Tamdan has taken A TON of heat on the Internet about his rounded back in these videos.

More than likely the people leaving comments on his YouTube videos couldn’t fight their way out of a wet paper bag.

In fact, on one of his deadlift videos I put up on Facebook, some guy commented on his technique being terrible. So I went to the guy’s Facebook page and he happened to have his best lifts listed.

His all-time best deadlift was more than 100lbs less than Tamdan’s!!

I’m sorry, but if someone is moving 100 plus pounds more than you, you have no business saying anything except “Nice lift man!”

Anyway, sorry for that rant. Here’s the video:

Obviously his back rounds a bit during both pulls.

Here is Konstantin Konstantinovs pulling. He has pulled a 939 without the aid of any gear whatsoever (no belt or anything!).

He rounds his back even before he starts and he’s the best raw deadlifter in the world.

And here’s a video of some high level Strongmen lifting stones.

Rounding your back before lifting a stone is a necessity in order to get into the proper starting position.

Why is it that when you round your back with a barbell all of a sudden it’s going to kill you, but when you do it with a stone (or another man, in the case of Karelin video below) it’s ok and even encouraged!?

Finally, here’s a quick video of the greatest Greco-Roman wrestler of all time doing what he does best. Look at his rounded back as he’s lifting his opponents. Not only is it rounded, but he’s having to stabilize against a very unstable opponents doing whatever they can to get out.

Now that you’ve watched the videos, think to yourself- how many times in a match do you round your back?

Do you come out alive and without injury?

I’m not here to start some movement in favor of rounded back lifting.

However, I am here to say that a little here and there certainly won’t hurt you once you’ve built a strong back and core. In fact, it will probably help prepare you for the different scenarios you’re going to have to deal with on the mat, so long as it’s done correctly…

Why/When Rounded Back Lifting Is Ok

I’d now like to go into detail about why the rounded back lifting shown in the above videos, is in my opinion, ok.

Whenever I check the form of a wrestler I’m always looking for signs of a lack of stability in their core.

Specifically what I’m looking for is any additional rounding to occur once the lift starts.

For example, when someone is squatting, once they set their core and begin to squat, I’m, among other things, looking to see if there is any additional movement in the core (ie they begin to round at the back).

When someone is lunging, I’m looking for the same thing.

And when a wrestler is deadlifting, I always look to see if there is any additional rounding once they begin the pull.

What is this additional rounding telling me?

That they are not effectively stabilizing their core.

Ultimately it’s an indication that they do not have the strength to maintain enough tension in their core to keep it stabilized. This means they are putting themselves at risk for injury.

On the other side of the coin, this is exactly why I think in all of the above videos, the athletes are not at a very high risk for a back injury (there is always a risk of injury when the core is being loaded). Each one of the athletes is effectively demonstrating stability throughout their core once they initiate the lift (ie no additional rounding is occurring once the lift begins).

This tells me they are bracing their cores effectively and, although they may not be in a picture perfect, neutral starting position, they are showing the necessary muscle tension throughout their core.

Although I can’t comment on back injuries sustained by anyone in the other videos, I can on Tamdan’s back health. For the 8 or so months that I trained Tamdan, he did not sustain any kind of back injury, nor did he ever complain of back tightness or pain after deadlifting.

I’m not trying to say that I am a proponent of training like this regularly. I just think people over-react way to much when it comes to this topic.

Anyway, I hope that helps clear up at least some questions you may have about rounded back lifting and what you should actually be on the lookout for in terms of what’s putting you at risk for a back injury.

Now, on to ways to train your body to get into and maintain a neutral back position.

Being able to effectively assess movement from the hips vs. the low back is a must if you’re looking to generate more power from your hips.

In addition, training your body to move from the hips, rather than the low back, will help keep it healthier and more resistant to injury.

So give this test below a shot and save your low back some potential pain in the future.

If you find yourself having trouble getting into an arched/neutral spine position at the bottom of a deadlift, or you collapse forward at the bottom of a squat, then I definitely suggest you try the test I talk about in the video.

From there I have a number of tricks/techniques that I use to improve movement.

If you’ve done this “test” and think you have a flexibility issue, check out these posts to get a better idea of some of the top ways I’ve helped wrestlers improve.

If you feel that your issue is more neurological, then definitely check out my Stripper Squat post. It covers a lot of details on how to implement this specific style of squatting to quickly improve your ability to move from your hips while maintaining a neutral spine.

In all honesty, I’ve found the Stripper Squat to be a great way to deal with both flexibility and neurological issues. So try those in conjunction with some of the positional releases and hamstring stretching techniques to really accelerate your progress.

The Final Piece To The Puzzle

It’s easy to overlook, but ankle mobility is an important part of low body flexibility. I’ve worked with wrestlers before who don’t respond to work on the hamstrings and hip flexors.

However, once they address their calf tightness, they’re “cured” and can finally move a lot more freely from the hips.

So I guess the pressing question today is- how can tennis help wrestlers?

Well, watch this video by Bill Hartman to get an idea.

In addition to addressing calf tightness (commonly associated with ankle mobility) with a ball, give some consideration to massaging with a Stick or Foam Roller.

If self massage is not an option, or not getting the results you’re looking for, you may want to consider hiring a professional.