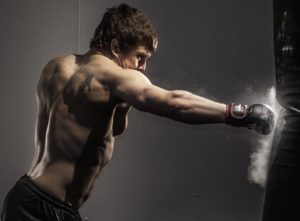 Your ability to generate power is a huge component of your success in wrestling.

By definition, power is the rate at which work is performed.

So the more power you generate, the faster you can get work done. In this case, by work I mean basically any situation where you need to move explosively in a match.

For instance, have you ever seen a slow takedown scored?

What about slow mat returns?

Being able to quickly perform these activities with lots of force is a huge determinant of success.

Anyway, if you look at the situations above, you’ll quickly realize that they are all performed by your legs and hips.

So, following a lifting program for wrestlers that maximizes the power your legs and hips can produce is of the utmost importance.

…You probably already knew this, but hey, I needed a convincing intro to get this post started.

But do you know how do you go about it?

Well, you’re in luck. Today I would like to present a few research studies that will directly impact your weight selection. When put to use, this research will help you to maximize your power output.

Check out this quote by some researchers (from study 1):

“…training with a load that maximizes power output (the optimal load) was shown to result in the greatest increases in muscle power. Therefore, identifying the optimal load in lifts commonly used for power training is critical.”

After reading that, it really became clear to me that there’s more to power training than my original belief which was “throwing heavy ass shit around.”

Then I read this quote…

“Because the optimal load varies according to the nature of a movement, it is imperative that the load-power relationship of various lifts be examined to establish effective, exercise-specific training recommendations.”

And it got me thinking even more.

So what do some of the research papers I looked at have me thinking now?

And how can you use the info to improve your power output for wrestling?

However, I was concerned with maximal power output during the Power Clean trials.

Here’s what was found:

“The present study identified the optimal load in the Power Clean to occur at 80% of 1RM.”

Peak power at this load was, on average, 4786 Watts. However, peak power was within 486 Watts of each output between 50-90%. This means that there wasn’t a whole lot of variation in power outputs.

“Kawamori and associates established that peak power in the hang clean was optimized at 70% of 1RM but was not significantly different from peak power at 50, 60 80, and 90% 1RM.”

So, between the 2 studies, power output was shown to be maximized at 70% and 80%. It is worth noting the Power Clean vs. Hang Clean difference. This may have played a role.

But regardless, here is my conclusion:

If you’re looking to maximize your power using a movement that is inherently explosive, use 70-80% of your 1 rep max.

**Please keep in mind that in the above conclusion I include Snatch variations and explosive DB lifts. These were not included in the research. However, based on the similarities between the lifts, I feel they will produce similar power outputs as the Clean variations.

This study investigated the force and power outputs of a Straight Bar Deadlift and a Trap Bar Deadlift.

Maximum peak power values averaged 4872 Watts. These values were obtained from the Trap Bar Deadlift at 40%. The researchers found little variance between 30 and 40%, though.

Still think you need to use Power Cleans to develop lower body and hip power?

Anyway, one suggestion from this paper really caught my attention:

“Some researchers have asserted that performing traditional resistance exercises with submaximal loads is an ineffective method for developing muscular power. This position is based on previous studies reporting extended periods of deceleration and reduced force production to slow the barbell velocity to zero at the end of the movement.”

Here’s what that quote means:

As you can see in this video, even though I move the weight explosively, in order to prevent myself from leaving the ground, I need to slow down at the top.

Because of this natural deceleration, I’m reducing my force production. Obviously, this is the exact opposite of what I’m looking to accomplish.

So, I got to thinking and here’s what I came up with:

No deceleration at the top, right?

And, I’m guessing, a much higher power output.

And here’s one with a straight bar, for those who don’t have access to a Trap Bar.

It’s pretty much a Jump Shrug, right? This is one of the introductory exercises in an Olympic lifting progression.

Here is my conclusion:

If you’re looking to maximize your power with a movement that is traditionally labeled as a strength exercise (Squat, Bench, Deadlift) use 30-40% of your max.

By the way, I’ve looked at a few studies on various Jump Squats. Unfortunately, the power outputs are not nearly as high as the Cleans or Jump Deadlifts.

Don’t get me wrong, Jump Squats can be used to increase the explosive capacity of your legs and hips. However, I’d stick to either 70-80% of explosive movements (Power, Hang Cleans) or 30-40% of your Trap Bar Deadlift performed with a jump.

“Cormie et al. proposed that the difference in optimum load was because of the distinct nature of the movements involved. With Olympic weightlifting exercises the ballistic component of the movement enables large velocities to be produced with near-maximum loads. As a result, power is maximized with relatively heavy resistances. In contrast, traditional resistance exercises produce low velocities with heavy loads and subsequently lighter resistances are required to maximize the product of force and velocity.”

…these guys are smarter than me. That’s why I like to quote them.

To summarize- explosive lifts (Cleans) are already fast. So you can use a higher percentage to maximize power output. Strength lifts are slower.

Compare the speed of the 2 videos below. That’s why the percentages have to be so much less.

Alright, we’ve established the percentages of your max that maximize your power output. But how do you work these exercises into your program?

Here’s a pretty good video explaining how to use it:

If you were using a Hang or Power Clean, this is what you should do:

1. Notice the 70-80% row in the chart (which has been shown to maximize your power output).

This means that the total number of reps you should do at 70-80% should be between 12 and 24. This total number should be achieved by using sets of 3-6 reps.

Based on that, here are some suggested set/rep schemes:

Obviously the % of your max that you choose factors in to the total stress of the workout. Make sure that you keep that in mind.

Based on my experiences, I typically prefer to do more sets with the lower number of reps. However, you can mix and match as you see fit.

Whichever set/rep scheme you choose, make sure to pull the plug (or take longer breaks) if you feel your quality of effort starts to go down.

Remember- you’re trying to maximize your power output. Forcing yourself to grind through sets where you don’t have the “pop” you need takes the focus off of what you’re trying to accomplish.

As far as the Jumping Trap Bar/Straight Bar Deadlift goes- stick to the same set/rep scheme above. Just be sure to use between 30-40% of your max.

Again, make sure that your quality of effort remains high throughout the sets.

While I try not to over-complicate training, I thought this research was worth bringing to your attention.

Hopefully this post helped you to get a better idea on how to maximize your power development.