Neck Strength Research And How To Use It 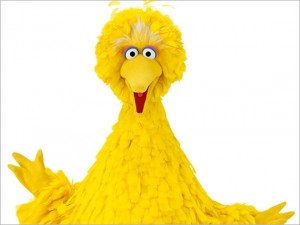 …for some reason the first thing that came to my mind when thinking about “neck” was Big Bird.

Anyway, it’s no secret- having a strong neck is pretty important if you want to be a successful wrestler.

But, did you ever wonder what the neck strength is in wrestlers at the highest level?

If so, then this research review is for you.

10 senior level Finnish Greco-Roman national team wrestlers between the ages of 22-27. Two of the ten had a long history of neck pain.

10 junior level Finnish Greco-Roman between the ages of 18-20. All 10 were top ranked in their age group.

10 healthy males who exercised 1-3 times/week. None of the men had a previous neck injury or neck pain.

No significant differences existed between the 3 groups in weight and height.

No significant differences in age existed between the senior group and the control group of healthy males. The juniors were, on average, 5 years younger.

No significant differences in neck thickness existed between the 3 groups.

In all of the directions tested, a significant difference was found between the groups.

The senior wrestlers had nearly equal strength between extension (lifting your chin up) and flexion (pulling the chin to your chest). This was different from the other 2 groups who had significantly greater extensor strength.

Further, senior wrestlers had higher levels of rotational strength (shaking your head to indicate “no”) to flexion strength. Additionally, both flexion and rotation strength was significantly higher in seniors when compared to juniors.

There are obviously many moves and positions that stress the neck throughout a wrestling match. It’s also been shown that under-developed, weaker muscles are more susceptible to injury. Therefore, increasing your neck strength will cut down on your risks of sustaining a neck injury.

Additionally, according to another study cited in this paper, upper body exercises were not shown to increase muscle strength and size in the neck. However, “when a specific head extension exercise was included in training, a marked increase in extension strength occurred as well as hypertrophy of cervical muscles, as indicated by magnetic resonance imaging.”

Basically what the last quote says is that strength and size (as measured by an MRI) in neck muscles got stronger by doing this:

Finally- “junior wrestlers should be advised to pay extra attention to the training of these muscle groups in order to attain the same level of strength as senior wrestlers if their aim is to compete as seniors in the future.”

Although this study compared junior (18-20) and senior (22-27) wrestlers, I’d venture to guess that the trend in neck strength, and strength in general is an upward one.

For instance, who is typically stronger- a pee wee wrestler or a middle school wrestler.

What about a JV wrestler and a varsity wrestler?

Generally speaking, as you move up in the level of competition, the physical qualities of the wrestlers you will be competing against also go up.

So be better prepared by “picking things up and putting them down.”

Get Started Strengthening Your Neck

For more info, check out- Neck Exercises For Wrestlers. In it I detail which harness I recommend and introduce a bunch of exercises for developing both strength and stability. I also cover why neck stability is crucial for success on the mat.

Additionally, one of the things missing from the post I link to above is an exercise for rotational strength. This is one aspect of neck strength that never really occurred to me. But, it’s obviously an important movement to train according to the research above.

After a few failed attempts at hooking up a neck harness to bands and cable machines, here is the way I found to work best when looking to train the rotational strength of the neck.

I’ve suffered at least one diagnosed concussion in a wrestling match.

This past season, one of the wrestlers I’ve worked since he was in 5th grade couldn’t compete at the end of the year due to a concussion.

So while wrestling isn’t as known for head injuries as say, football, there are occurrences.

In a recent article on BJPenn.com, Roy Nelson’s “condition” of being very difficult to knock out was explained. One of the suspected reasons- he has an abnormally strong neck. For more info, read the quick post here.

Anyway, just another quick reason as to why you may want to start implementing this type of partner neck training.

Alright, that’s it for today. Let me know if you have any questions on neck training by commenting below. You can also email me directly at dickie@wrestler-power.com.