One Way To Break Through A Plateau 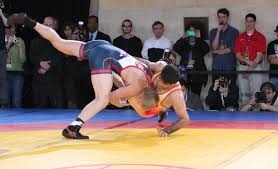 Developing your strength and power is a week in and week out battle. In all honesty, sometimes things can get stale and you can find yourself plateauing.

There are a lot of ways to address a training plateau, but some research done on Cornell wrestlers (among other Cornell winter sport athletes) may be just what you’re looking for to give your program a boost.

The best part about this research- 2 of my professors from college (Sforzo and Sigg) were involved!

The research was performed during post-season lifting in 44 winter sport athletes. The athletes participated in these various sports- men’s and women’s basketball, wrestling, and women’s hockey.

This study was performed in 2007 so it potentially involved future NCAA Champions Troy Nickerson and Jordan Leen.

Anyway, 21 of the athletes were randomly assigned to the control group. This group used standard weight during their 7 week program.

The other 23 athletes were assigned to a group that used elastic band tension to account for 20% of their training weights for Squats and Bench Presses. This group followed the same 7 week program other than the adjustments made to the Squat and Bench.

Strength was measured by the Squat and Bench Press. The maxes were estimated from a 1 to 3 rep max. If the athlete did 2 or 3 reps, a formula was used to determine their max.

Power was measured via a vertical jump test.

The lifting that was listed was as follows:

So as you can see, there wasn’t anything special or different about the program.

Additionally, the exercises were not unfamiliar to the athletes. So, essentially the only difference in the training program was the bands.

“Post-training testing showed that average power improvement was significantly greater in band group than in the free weight group. The change in peak power was not significantly different between the groups.”

To summarize, both groups saw significant improvement in power (as measured by a vertical jump). However, the band group didn’t stand out as being significantly better than free weight group.

“In support of our hypothesis, the main finding of this study is that using heavy elastic bands to alter resistance patterns during weight training allowed for greater gains in strength and power measures during a 7-week training period compared with traditional weight training.”

“The application of bands may become another tool to provide variety as athletes move through their yearly training cycles. It may be that short cycles of bands can help an athlete overcome the plateaus that occur in strength and power performance.”

Well, first you should pick up some bands. If you’re following the percentages used in the study above, go with lighter bands, because you only need them to make up about 20% of the total training weight.

Here are some links to the 3 types of bands I use with the wrestlers I work with- band 1, band 2, band 3.

After that, if you want to get technical get a fishing scale. This will take a lot of the guess work out of the standard guess, check and revise method. 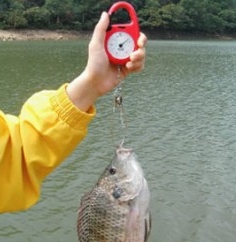 Just do a quick search or swing down to a store with a sporting goods department. I found a 50lb scale from good ol Walmart for $5.

Use the scale to determine which setup achieves a total of 20% of your training weight at the top.

Here’s a video of me anchoring a band to a rack and pulling it up to a squat bar:

Based on the feedback from the fishing scale, simply add or subtract revolutions of the band around the base of the rack.

Don’t have a rack that will allow you to do this?

Just bring over two heavier dumbbells, place them on the sides of the rack and knot bands to them. Again, make adjustments to the number of knots based on the total poundage at the top you’re looking to achieve. 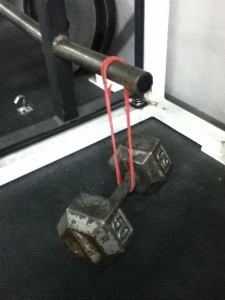 Use This Info To Increase Your Pulling Strength:

However, now I have a better understanding of a proven percentage of total resistance you should look to achieve when using bands. As a result, I can start making adjustments to ensure maximal strength gains are achieved.

Basically what I’ve been doing is implementing band resisted Cable Rows and Pulldowns (only sometimes) as accessory exercises. I run a band from this hook I screwed in under the Lat Pulldown at my gym:

Before I attached the hook, all I was doing was knotting a band to a dumbbell (shown in an above picture). That’s a suitable option. I just happened to find this hook for under 2 bucks at a hardware store so I decided to try it. Because you’re probably not going to be allowed to drill holes into the floor of the gym you go to, go with the dumbbell setup.

The same ideas from above apply. However, I don’t have the guys work up to a 1 rep max to determine things.

Rather, I simply take the weight they do, on average for 6-8 reps (which is usually the rep scheme I have them follow). I then take about 20% of the weight off and replace it with an equal amount of band tension. 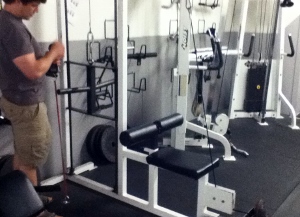 What you don’t see in the picture is someone performing a Cable Row and holding it at the end of the movement. That allows me to estimate how much tension the band will produce.

While I don’t want you to experience a training plateau, I hope that this post provided you with a fairly easy-to-implement solution to help you get back to making progress.

If you have any questions on how to utilize bands in your training program leave me a comment below or shoot me an email at dickie@wrestler-power.com.