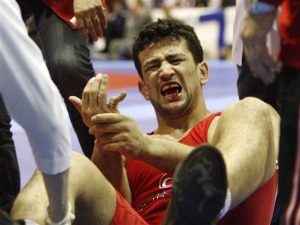 Summary- “Wrestling, both a contact and collision sport, places extreme demands on the entire body. These demands all too often result in injury. With injury rates second only to football, strength and conditioning professionals must understand not only injuries common to wrestling but also how a properly designed, well-planned strength training and conditioning program may help decrease this high injury rate. The sections that follow provide a brief overview of wrestling, including its muscular and physiological demands, and suggestions for exercises intended to reduce the risk of common injuries while improving performance.”

The authors begin stating that wrestling is highly anaerobic. It therefore requires max strength and power to increase the chances of success when performing explosive movements.

Additionally, if overtime occurs, even better conditioning is required.

Finally, with practices lasting around 2 hours, there is also a significant aerobic component.

Therefore, the authors conclude that monitoring the development of both systems is essential for success.

As far as injuries go, wrestling is second only to football, according to NCAA data. The authors cite a statistic from 2003-2004 that found 5.7 injuries in practice and 25.8 injuries in a competitive setting occurred per every 1,000 “wrestler exposures.”

The authors also mention that high school wrestling holds a similar rate of injury with 6.0 per 1,000 exposures.

In both the collegiate and high school setting, the number one position where injuries occur is neutral. The most common sites of injury are the knees, ankles, face, shoulders, and neck.

Fortunately the most common types of injuries are sprains, strains, cartilage tears, and bruises.

Additionally, less than 25% of all injuries to college wrestlers (during the 03-04 season) occurred in the first period. This suggests that fatigue contributes to increasing risks of injury. This makes an even stronger case to get in shape!

The authors state that wrestlers with lower levels of strength, balance, and neuromuscular control are at higher risks for injury. To help reduce the risk of injury, wrestlers should follow a performance program that is designed to increase strength, explosive capacity, and balance.

When designing a program, especially one focused on injury prevention, the authors suggest that one should focus on the demands wrestlers face while on the mat.

One example they provide is upper body stability. They state that this is increased by partner wheelbarrow drills.

The authors also reviewed a study that found high school wrestlers with greater flexibility in their shoulders suffered fewer injuries over the course of a season. As a result, they suggest that shoulder flexibility be one focus of a training program.

In addition to flexibility, they also suggest increasing rotator cuff strength, shoulder endurance and stability, and implementing a program that promotes muscular balance across the shoulder joint.

On top of that, they suggest that plyometric exercises for the upper body/shoulder be included to increase power and joint proprioception (“joint awareness”).

Here are a number of exercises they suggest:

3. Plyometric exercises such as push-up depth jumps and cross-over push-ups with a medicine ball, which improve the ability of the upper extremity to control forces when landing. This ability proves invaluable when attempting to brace oneself during a fall to the mat (ie, from the previously mentioned neutral position) and is thought to reduce the risk of subluxation-dislocation.

4. Exercises incorporating a stability ball, including push-ups (feet on ball or hands on ball), walk outs, and supine row.”

One thing that makes wrestling unique, according to the authors, is that the head/neck may be weight bearing during a match.

As a result, there is an increased need for strength and stability throughout the cervical spine (neck area of spine).

Just like with the shoulder, muscle imbalance and/or weakness will increase the risk of injury to the neck.

Be sure to check out my post on neck research and how you can use it to improve your performance and decrease your risk of injury.

Also, check out my post detailing a number of neck exercises.

Here are a number of exercises suggested by the authors of this research paper.

2. Manual resistance in all planes of motion. This may be performed with and without movement.

3. A 4-way neck machine, which may be used to increase uniplanar flexion, extension, and side-bending strength.”

Injury to the knee is the most common type of injury in wrestling. The two most common places are during a takedown or when you’re on bottom.

As far as sprains go, the ankle is the most frequently injured site in wrestlers.

“Due to the close relationship of knee and ankle and crossover effects of training programs for the individual joints, injury prevention programs may address both joints simultaneously.”

Here are a number of exercises recommended by the authors.

“1. Performing any of these exercises in single limb stance mimics takedown activities.

3. Plyometric exercises, such as squat jumps and split squats with cycle, served an important role in developing explosive power necessary for takedowns.

4. Other exercises to improve balance and strength include partner perturbations, standing medicine ball side toss, and ski jumps.”

One of the biggest factors in recovering from an injury is compliance with the rehab program. Research has shown on a number of occasions that increased compliance decreases the rate of recurrence.

Unfortunately, although highly motivated, a 6-year study cited in this paper showed that fewer than 50% of collegiate wrestlers studied were compliant.

Compare this to 40-91% associated with athletes in other sports. It’s quite clear that, while determined and excited to get back, wrestlers may be better served listening to their sports-medicine professionals. This will decrease the likelihood of an injury that comes back.

As mentioned earlier in the post, a majority of injuries occur when a wrestler is in a state of fatigue. Therefore, an equally important factor when designing an injury prevention program for wrestlers is proper incorporation of conditioning.

“A multifaceted, well-designed conditioning program incorporating resistance training, plyometrics, proprioceptive, and balance exercises will certainly improve athletic performance. Perhaps as important, these exercises- in concert with an awareness of common injuries, an emphasis on proper technique, and the development of multiple metabolic systems- will concurrently decrease injury rates.”