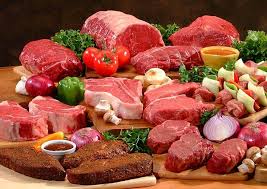 Here are some of the important points I found regarding protein intake for wrestlers.

I read about them in a journal article entitled “Nutrition and Hydration Issues for Combat Sports Athletes”.

Protein that you find in food and supplements is composed of amino acids.

There are 20 total amino acids.

9 are essential, meaning your body can’t make them.

11 are non-essential, meaning your body can make them.

Protein serves as the major structural component to both muscle and other tissues throughout your body. They are also used to produce hormones, enzymes, and hemoglobin. In a nutshell, protein is essential for survival.

While protein can be used to supply the body with energy, it is the least desirable source. Stored carbohydrate and fat are much more preferred by the body. If protein is used for energy production, it most likely means that the body is breaking down muscle and other lean tissue to make up for an energy deficit.

How Much Protein Per Day?

In the journal article, the authors cite a study by Tarnopolsky et al. which demonstrated that strength-trained individuals need 1.8 g/kg/day of protein.

These findings were shown to be consistent with other studies referenced in the paper. Those references cited that athletes of a similar strength training status maintained a positive nitrogen balance with between 1.4 g/kg/day and 2.4 g/kg/day.

Based on these studies, the authors concluded that wrestlers should consume protein somewhere in the range of 1.4-2.0 g/kg/day.

One of the most important issues the authors go into detail on is the fact that wrestlers, at times, restrict their daily caloric/protein intakes. The authors cite other research in their paper demonstrating that during prolonged periods of inadequate caloric intake, a higher consumption of protein helps to minimize the effects of muscle breakdown.

Based on these findings, the authors suggest that whenever a wrestler is following a low calorie diet, that their protein intake remain as high as possible.

Research cited by the authors found that an increase in amino acid concentration in the blood was approximately 100% higher when compared to resting levels after the ingestion of essential amino acids.

However, amino acid concentration was only about 30% higher compared to resting levels after the subjects ingested whey protein.

Additionally, the researchers found that the delivery of the amino acids to the muscles active during exercise increased 7.5 times. However, the whey protein group only experienced a 4.4 times increase.

Obviously these findings are substantial.