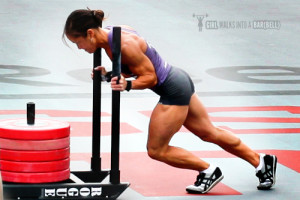 Ok, before I get into the Prowler Burst, let me first give you a quick rundown of the research I’ve been doing and why I believe the Prowler Burst is one of the best exercises you can do if you’re looking to increase your shot speed and power.

In my first post on the topic, I announced the idea of how I’ve decided to start measuring and tracking shot speed and power in wrestlers. Obviously a lot goes in to scoring a takedown, but being fast and explosive certainly helps increase your chances.

In my next post, I detail some of my initial findings as well as review a research study that investigated the predictors of fast lunging speed (not a shot, but a similar movement). I also discuss the findings of the research paper and how they compare to what I’ve found so far.

Finally, in my third post, I write about what my thoughts are on shooting with bands versus sprinting with bands and what my findings thus far would suggest the best option is if you’re looking to increase your shot speed and power.

Alright, now that you’re a bit more up-to-date on my research, here are some of the conclusions I’m discovering:

1. Movement speed is crucial. All of the new exercises that I hypothesized would increase shot speed and power were all exercises that required maximal rate of force development (generate a lot of force in minimal time). When taking a shot, it’s imperative that you produce maximal force in minimal time. Otherwise you’ll increase the likelihood you’ll get sprawled on.

2. Movement direction is equally crucial. I have found no significant increases in vertical jump performance with any of the wrestlers I’ve been testing. However, their shot speed and power consistently increases.

Why is this the case?

Almost all of the power exercises I’m having them perform are horizontal, not vertical.

Anyway, that’s enough of the science stuff. Here’s how to perform the exercise:

There are two ways I like to perform this exercise.

The first is unweighted (just the Prowler itself).

The second is with between 30-40% of your max push. For more on why I am confident this will have great carryover to power production read this post.

Finally, if you want to learn why I think the Prowler is one of the best pieces of equipment for wrestling, read Lifting Programs for Wrestlers.