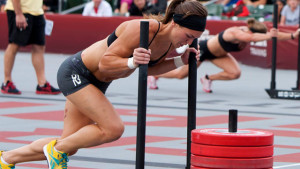 The Prowler is a must in lifting programs for wrestlers.

As far as specificity goes, it’s the best at developing functional leg strength for wrestling.

More specifically, think about how much horizontal force you produce versus vertical force. Other than lifting to finish a takedown, all of the force you need to produce on your feet is horizontal.

Developing this strength is crucial to maximizing your effectiveness on the feet. And while squats are great at developing leg strength, the Prowler is better.

It builds strength horizontally. This is important because training as specifically as possible is a key component to carryover to the mat.

To get better at wrestling, you spend a lot of time wrestling right? Going over specific techniques, scenarios, etc.

And, generally speaking, as you gain more experience through practice, you become better in competition, right?

That’s because of the specificity of your training.

You wouldn’t expect to get as good of a carryover if you played soccer 2 hours a day instead of go to wrestling practice, would you?

The same goes with how you seek to develop strength and power in the weight room.

And two of the biggest components to maximal carryover are:

Specific speed isn’t going to be developed with heavy Prowler pushes and drags. But, direction specificity will be trained.

There are a few ways I have wrestlers push the Prowler for strength.

The first, is high bars only. Here’s what that looks like:

For any of the pushes, the big thing I look for is that there is a consistent speed. It doesn’t need to be fast. However, I don’t want there to be any stops.

It just makes it easier to measure progress. For example, say a wrestler pushes 500 pounds. It’s a struggle, but he moves consistently like the wrestler does in the video above.

The next week he pushes 550. However, he stops 3 times to get his footing. He’s slipping, going very slow, and is visibly struggling a lot more.

Is he stronger? Or is he just using heavier weight?

Side Note- one thing to keep in mind is the humidity factor. For whatever reason, on really humid days here in Central New York, most people use about 100 fewer pounds on the Prowler.

The stickiness in the air makes it equally sticky for the Prowler. I’m not sure why that is. I’m not a meteorologist. All I know is that over the years, on humid days, everyone struggles.

Anyway, the second way I have wrestlers use the Prowler is pushing both the High and Low Bars.

I usually have them start with the High Bars simply because the turf at my gym is more worn on one side. By using the High Bars, it makes it easier to start at that end.

This is a great option if you train by yourself. Spinning a very heavy Prowler can be difficult, especially as you get stronger. Pushing High-Low will save you having to take off and put on weights after each push.

The final way is to push Low Bars only. I don’t do this as often. The primary reason is I don’t like the angle it puts your upper body in. In a match, you’re typically not bent over like that while driving in to finish a shot.

However, it’s such a minor thing to take into consideration. One of the best times to use a lot of Low Bar pushes is actually during the season. Although I don’t think the joint angles aren’t as similar, you’ll use a lot less weight.

As a result, the total wear and tear on your body should be less than if you were to struggle the same amount using the High Bars (and quite a bit more weight).

The Prowler Drag is something I use a lot less in my programs.

At my gym, I have a total of 45 feet of turf. So, when performing a Drag, you end up maybe covering 25 feet or so. This isn’t bad, it just is a little less than if you pushed the Prowler. So, for that reason, I tend to favor pushes.

When the weather is nice, I have wrestler perform Drags outside. During the season, the wrestlers who train at my gym tend not to use them as much.

I first got turned on to these by Joe Defranco. He’s a big proponent of them because it replicates the posture you’d be in when accelerating during a sprint. Similarly, I like them for the same joint angles. But I feel, the forward lean you achieve when dragging, closely resembles your posture during a leg attack.

There are a number of ways to perform the drag. I used to use a belt or a chest strap. But now I favor using a Gi or thick rope. I think it’s an awesome grip addition to one of the best exercises you can do.

Here’s a video showing you how to perform it.

How I Program It

Here are some of the most common ways I list the Prowler in a program:

1. Prowler H-L (4x). This means to push the Prowler high bars down and low bars back for 4 total sets.

3. Prowler H, SL (4x). This means to push the Prowler high bars only for 1 single length (SL) trip (not down and back) for 4 total sets. This is meant for super heavy pushes.

I’ll use any combination of the “code” above.

How Far Do I Push?

Like I mention in the video above, the turf at my gym is about 45 feet. That gives gym members about 35ish feet of usable pushing/pulling space.

What I always suggest to people is this- work within a distance that you’d cover on the mat. I have wrestlers use the whole turf because it’s available. But, it’s by no means a magic number.

To be honest, as far as being as “functional” as possible, I probably wouldn’t push the Prowler for more than 15 feet, since you won’t be covering any more than that to finish a shot. Make sense?