Improving your upper body pulling strength is crucial if you want to maximize your potential as a wrestler.

Because I’ve written about it time and again, I won’t rehash any of it today.

Instead, I’d like to discuss a classic exercise that I’ve been using more and more in the programs I design for wrestlers.

Although the bodyweight row progression has been a mainstay in my programs for quite some time now, I’ve typically alternated it with 3 other rowing variations- the chest supported row, the dumbbell row, and today’s featured exercise, the cable row.

What has me liking the Cable Row more and more lately?

First, let me tell you why I’m drifting away from the chest supported row.

I get two common complaints with this piece of equipment. The first is that it’s too hard to position yourself in order to get a good pull toward your chest. This is primarily because the machine works in somewhat of a fixed path.

The second is that most of the guys I talk to feel their lats working a lot more during the cable row when compared to the chest supported row.

I know we’re not bodybuilders here, but getting good activation in the muscle(s) you’re trying to strengthen is still an important factor. It’s like performing a core exercise and not feeling it in your abs. Some kind of adjustment should to be made.

As far as the dumbbell row goes, I’m still a fan of it. However, I feel like it needs constant coaching to ensure the lats are actually working and that momentum isn’t taking over. I covered this idea in this post.

So, by process of elimination, we’re left with the cable row.

Why the cable row?

For the exact opposite reasons I detailed above.

The feedback I’ve gotten about this includes increased activation and a better ability to control the line of pull.

Additionally, I’ve added a tweak to this exercise to make it a little more wrestler-specific.

I actually got this idea from a research review I read a few months ago.

Here’s a quick conclusion from it regarding muscle activation:

“Additionally, the seated row while recruiting the latissimus dorsi and biceps brachii more or equally effectively as the lat pulldown also recruits the middle trapezius/rhomboid muscle group to a greater extent.”

And here are 2 additional conclusions on the same research paper from biomechanics genius, Chris Beardsley:

He states that when you perform seated rows, it’s important to make sure you perform scapular retraction (pulling shoulder blades together toward spine). This has been shown in research to improve muscle activity. Additionally, he suggests that it’s likely helpful in improving overall shoulder health by increasing range of motion.

“Whether you use chins or pull-ups is likely not going to make or break your training routine, so you should probably go with what you prefer or mix it up to prevent things getting stale. If pushed, the chin is probably slightly better because more weight can be used.”

…I know this post isn’t about chinups, but I wanted to throw in some of the conclusions above because they’re relevant to strength training for wrestling.

And here’s a nice graph Chris created that does a great job summarizing the results of the study: 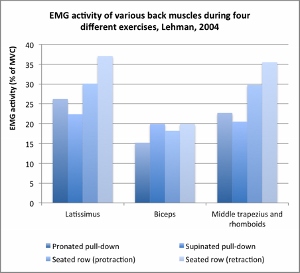 As you can see, the muscle activation in the seated row with retraction is highest.

In addition to the benefits above, the other thing I like about this study is that it measured muscle activity during a 10-second hold. While I don’t think a 10-second hold is necessary, I do like adding a hold for wrestlers because it improves their static strength.

Because of the dynamic and unpredictable nature of a wrestling match, a variety of athletic qualities and strengths are needed. One of these is static strength.

Static strength is seen all the time during leg attacks when you first get in on a shot but don’t immediately finish. It’s what helps you to hold on as you work on finishing the takedown.

On the opposite side of the coin, it’s a breakdown in this quality that leads to you losing the takedown after getting in on a deep shot.

Obviously, including elements that build functional strength for wrestling is important.

In fact, here are a few relevant conclusions from a paper entitled Special Considerations for Designing Wrestling-Specific Resistance-Training Programs:

Isometric muscle action is of great importance in wrestling, and should therefore be emphasized in a wrestling strength training program.

Besides the need for isometric grip strength when looking to hold onto an opponent, nearly every position in wrestling can have a static component to it.

“Isometric training can be undertaken with simple partner exercises and manual resistance along with the previously mentioned rope and towel work. Partner exercises are also desirable, because they develop competitive attitude and specifically prepare the wrestler for the actual activation with nearly complete carryover to the sport.”

Finally, in regards to how long isometric contractions should be held, the authors suggest that this should be individually specific based on individual needs and what time of the year it is. For example, over the summer when the wrestler isn’t competing this isn’t as important as a couple months before the end of the season tournaments.

Here are some additional points made in a paper authored by top sports scientist, William Kraemer:

He states that specific isometric exercises designed to increase both grip and upper body strength need to be included in a lifting program for wrestlers.

In general, he states that sports scientists and strength coaches use isometric holds for between 3-10 seconds per rep.

Another thing to keep in mind when implementing isometric training is the angle of the joint(s) when the hold occurs. Research on isometric training has demonstrated that the adaptations are angle-specific. This means that strength will only be improved in the positions that you hold the isometric contraction.

Because it would be impossible to train every joint angle, careful selection is needed to maximize the carryover of the program to the mat.

As far as how I work these into programs, I will typically place this as the first pulling exercise.

Depending on your goals and the time of year, I’ll use different sets and reps when designing a program.

As far as how long to hold- I usually suggest around 3-5 seconds. You’re more than welcome to adjust this as you see fit.

The fact of the matter is you can’t neglect horizontal pulling if you want to improve your pulling strength for wrestling. In my opinion, the Cable Row with a hold is one of the best ways to do this.