Before I even start writing this, I already know that it’s going to be a long post. But I promise you, if you read it all the way through you’ll have a great understanding of me and you yourself may just experience a rebirth.

Our story begins almost a year and a half ago. It was April of 2009 and Laura and I (along with the help of a number of members of the wrestling community to whom I am forever appreciative for) had just moved our gym to our new location. We were as excited as ever to be off on our own in a new place that we were confident was going to take our business to the next level.

On top of that I was enjoying living the life of a “Large American” weighing about 205 and fully embracing the life of a powerlifter (lots of eating, heavy lifting, not much else). Chris’s (my brother) nickname for me was “Fat Boy” because I wasn’t a stranger to the various fast food places in town (picture below to show you what I mean).

However, it was not long after we moved in that I started to notice a big increase in the number of times I was going to the bathroom (no, I’m not talking about #1 here). Without getting into some of the symptoms I was experiencing, if you want to know more check out Wikipedia. At the time, I didn’t think much of it. I just figured I was sick and that it would go away.

…After a few weeks though, I began to get a little worried. Nothing had slowed down, I was losing weight and feeling weaker. I had no idea what was going on with me and I was starting to get really nervous that something might be seriously wrong. I knew I needed to see a doctor, but without health insurance, that wasn’t exactly something I could just go and do. I did some research along with some of my friends and family and we “diagnosed” me with Ulcerative Colitis.

After deciding that’s what I more than likely had, I realized I REALLY needed health insurance because there was no way I’d be able to afford all of the tests and procedures the doctors would need to perform on me.

…On a quick side note, I know there are a lot of Obama haters out there, but I for one support his health bill. In my opinion, there’s no reason why a hard working, self-employed, tax paying, young entrepreneur who was in grad school at the time should EVER fear going to the doctors because of lack of coverage.

Anyway, back to the dilemma I was facing- sicker than I’d ever been and no way to see a doctor. I started to look online for different plans, but most of them took many months to get everything processed. Additionally, I wasn’t sure how well I’d be covered. That’s where my girlfriend and business partner, Laura, comes in. One night we were talking about options when the idea of marriage came up. She was working at Worldwide Sports Supply (yeah, the company you probably purchase all of your wrestling gear from) and said I could get on her plan if we got married.

2 weeks later I was married, had insurance, and was setting up doctors appointments.

A few months later and I had been in to see various doctors, been diagnosed, and was starting meds. I was in the clear….or so I thought.

Eventually the doctors decided that these ups and downs had to stop. As long as I was still experiencing the symptoms of UC, I was running about a 50% risk of getting colon cancer within 10-15 years. 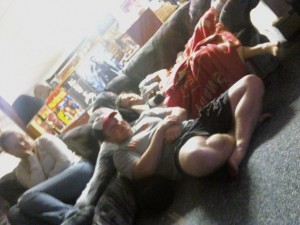 Above is a picture of me at my peak weight of about 205 to give you an idea of what I looked like not too long ago.  My wonderful wife, Laura, is sitting on the couch above my right shoulder…I was too round to share the couch with her!