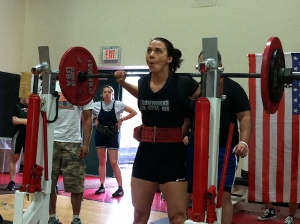 I’ve written about it before based on the personal research I’m doing (Fixing Your Squat).

However, today I have some published research that should help to provide more answers regarding squats and their carryover to wrestling.

…by the way that’s a pic of my wife, Laura. She’s an elite-level powerlifter.

So yes, she’s stronger than I am.

The purpose of the study was to examine the relationship between squat strength and various sprints.

Height, weight, and squat 1 rep maxes were measured on day 1. The 1-RM squat strength was divided by the player’s body weight to arrive at a “pound for pound” number.

The sprints were tested within the week on an outdoor track and were measured using a digital timing system.

A statistically significant correlation was found between both the 10- and 40-yard sprinting time and per pound squat strength.

Some of the players were also divided into 2 groups for further analysis. Players with a squat to body weight ratio greater than 2.1 were placed in one group. Players with a ratio less than 1.9 were in another group.

The players in the 2.1 or greater group had statistically significant lower 10- and 40-yard sprint times.

However, there was not a statistically significant difference observed in the 5-yard sprint.

“This investigation clearly shows, in conjunction with previously reported data, that a substantial commitment to increased squat strength has a high likelihood of contributing to increased on-field sprinting ability.”

Tying this together with the 2 posts I just published regarding Ground Reaction Force (GRF 1 and GRF 2), the results of this study suggest that the subjects who could produce more force against the ground (as measured by 1-RM squat), were able to translate that into faster sprint times.

So, with a little bit of extrapolation, I think it’s pretty safe to assume that if you’re looking to score more leg attacks, increasing your leg strength via squats is probably a good investment of your time.