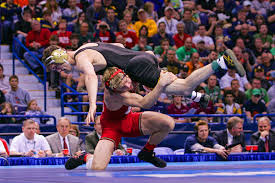 “Sale (1991) defined strength as the force exerted under a given set of conditions during a maximal voluntary contraction (MVC). Sale continued to define power as the rate at which mechanical work is performed under a specified set of conditions, or the product of force and velocity. Both definitions imply that strength and power are defined by conditions such as velocity, contraction type, posture, and movement pattern specificity. That is, strength for one task may not imply strength for another.”

The quote above is essentially the driving force behind my quest to measure and understand the interactions between various weight room strength and power measures and if/how they are correlated to shot speed and power.

I came across the paper I’ll be reviewing today in my search to find anything that would help me to better understand potential relationships that I’m looking to identify.

Ultimately, my goal remains the same- to design the best lifting programs for wrestlers.

After I detail the paper, I’ll cover some of the initial findings from the second round of testing.

Lunge Performance And Its Determinants

A leg attack is not a true lunge but there is a lunging aspect to it. So while this isn’t 100% applicable to wrestling, I think the researchers made some valuable conclusions.

Anyway, here are the most relevant points…

The researchers in this study sought to achieve a better understanding of force-time measurements.

In a cited study by Schmidtbleicher from 1992, it was suggested that max strength is a key component for movements longer than 250ms (milliseconds).

The authors stated that the ability to lunge quickly and return to set up for the next attack or reaction is a key to success with fencers. Obviously, wrestlers’ don’t technically lunge. However, in order to complete a leg attack or get back into position to defend, you must be fast.

Therefore, the authors stated their primary objective was “to determine which strength qualities are important predictors of lunge performance.”

The squat jump was performed on a machine where the user would lay on their back. They would be in a position parallel to the ground. A similar machine to what was used is seen in the video below:

The researchers used a number of statistical models to predict lunge performance.

The closest relationship they found was leg length and flexibility. This could be used to predict 85% of the subjects’ lunging performance.

However, the next closest relationship, when body mass was taken into account, was average power and relative (body weight) strength. This could predict lunge performance 76% of the time.

What does this mean?

Anyway, back to the study…

The authors concluded that the above findings suggest that lunge performance would benefit at training focused on increasing explosive strength and rate of force development. More specifically, they stated the training should be focused on the legs/hips.

Those are important power muscles for wrestlers too, right?

This directly conflicts with Schmidtbleicher’s findings. The researchers in this study found that foot contact time during a lunge was greater than .25 seconds. In this case it was, on average, .354 seconds.

Additionally, the authors found that single leg max strength and lunge performance was found to be non-significant.

Body weight was found to be a predictor of lunge performance. The researchers found that the subjects’ who produced more power per pound of body weight were shown to be faster.

“It would appear that methods aimed at improving fast SSC ability are most suitable for improving lunge performance.”

“They concluded that the most experienced fencers achieved the greatest lunge velocities.” This, when extrapolated, means that as your on-the-mat experience increases, so will your shot speed.

This has also been shown in a few boxing studies I’ve read. The findings showed that the most experienced boxers had the fastest and most powerful punches.

The researchers also concluded that no single strength test can be used to determine lunge performance due to the number of variables that influence it.

However, as far as the data produced from the squat machine tests, the athletes who produced peak force in minimal time were found to be the fastest when it came to lunging.

In a nutshell the various conclusions toward the bottom all suggest that lunge performance is best predicted by the person’s ability to generate a lot of force very quickly (high rate of force development).

Additionally, one of the quotes that I thought was most relevant stated that the most experienced fencers were found to achieve the highest velocities.

This essentially goes hand in hand with the high rate of force development conclusion. In a way, it suggests that velocity is the more important part of the equation when it comes to maximizing the effectiveness of your shot.

This past Sunday I re-tested some of the wrestlers I’ve had on a training program since August 25. Specifically, this program was designed to improve shot speed and power.

The theory I had was that by to have wrestlers using exercises that produced higher outputs than when they took a shot, they would become better at producing those forces.

Here’s a quick video to give you an idea of how I’m using the Tendo Unit to measure a wrestler’s speed and power:

The only real comparisons that can be made are from the single Peak Power and Peak Velocity outputs compared to the single measurements taken on 8/25 (in numbers 1 and 4 below).

Regardless, here are the results of the first round of testing.

This means that during his best shot, he’s shooting with almost 33% more power than he was 2 months ago.

This is the highest average Peak Power in a set of 5 compared to the single effort peak number 2 months ago. This is kind of a weird number because, again, I only recorded the best values 2 months ago. However, I thought it was worth looking at.

This means that his shot power, on average, is 5.5% more powerful than it was 2 months ago. This, I think, is pretty significant considering there was an almost 1,100 Watt difference between his most powerful shot and his least powerful shot during this testing.

We all know that a wrestler will take good shots and bad shots. To know that his average shot is now 5.5% more powerful than his Peak Power output from 2 months ago is a pretty exciting finding.

To conclude, because this is a new thing, I don’t know how much I can comment on the numbers. I will be looking at weights and increases in other aspects to see if I can draw any conclusions between specific exercises that may be improving along with shot velocity and power.

However, in general, I’m very happy so far. Think about the % increases a typical lifter would experience in an 8-week training cycle. While your lifts typically go up, rarely/if ever do they increase as much as almost 39%!

What’s even more exciting is that the 39% increase came from the most experienced wrestler in the group. He’s currently ranked as a Top 15 recruit for the class of 2016. Typically big improvements like that are most commonly realized by less experienced/”untrained” athletes.

Anyway, think about that 39% increase…

That’d be like taking your squat from 200 to almost 280 in 8 weeks. That’s virtually unheard of. So to have increases, especially in the numbers we can actually compare in (numbers 1 and 4) is awesome.

Anyway, I hope you find this info useful. As I get more collected and analyzed, I’ll make more available.

Let me know what questions/thoughts you have by commenting below. Thanks!