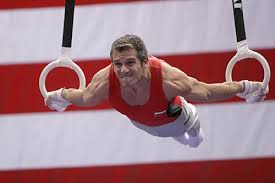 Anyway, the word core is used a ton nowadays. But, have you ever stopped to think what it means and how it applies to you as a wrestler?

Well, you’re in luck, because I’ve already covered that in great length- Exercises for Wrestlers- Core Strength and Stability.

So, rather than get into the importance of core stability and what it means for your performance, I’d like to get into an exercise progression that I use regularly with the wrestlers I work with at Ironworks Gym as well as via email.

Before I get into the specifics of the exercise, I’d first like to cover why I’m such a fan of going over progressions.

Although I am fortunate to work with a lot of experienced lifters/wrestlers, at one time they were all beginners.

And because they were beginners, they were very weak. This included weakness in their abs/core. They simply did not have the strength or stability for advanced exercises. Additionally, I would have been doing them a disservice by allowing them to use advanced exercises without building a proper base.

So, rather than force them to perform an exercise they didn’t have the strength for, I had to start them with less demanding variations.

Another reason I like to introduce progressions is to make you, the reader, more aware of how you can better personalize and challenge yourself based on your current physical capabilities.

Finally, I like progressions to make coaches aware of quick tweaks they can make to ensure that all of the wrestlers on their team are being adequately challenged.

Alright, with that said, let’s get into it.

The first stage is to master the plank. Typically this is pretty easy for a wrestler. However, if you find yourself struggling to hold a plank, by all means, start here and properly train your core to stabilize before you move on.

Here’s a video of me performing a plank:

You should focus on keeping your ankles, hips and shoulders in a straight line while bracing your core. The goal is to prevent any curvature in the low back.

…My hips should have been slightly lower in this video. But as far as how the low back should look (flat), this is what you should be looking to achieve.

Once you’ve mastered the plank you can move on to a plank on a ball: 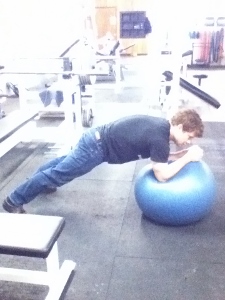 The same focuses from the plank are relevant when you’re on the ball.

…Come to think of it, the focuses of the plank are the same with all of these variations. So keep that in mind- don’t progress until you meet these 2 criteria:

1. Your body is in a straight line.

2. You can effectively brace your core for the number of reps or time (you don’t “dip” at the low back as shown below). 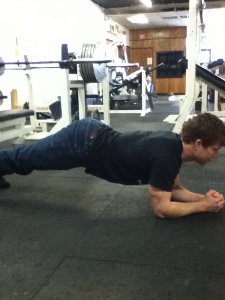 “Dipping” is a sign that you’ve lost stability in the core, which is what you’re looking to train. When this happens, the exercise has lost its purpose, so stop and take a break.

Once you’re comfortable with planking on a ball, you can progress to the Ball Rollout:

To help maintain stability and control of the exercise, I like to use a controlled tempo. You also increase the total time your core has to stabilize by using a slower, more controlled tempo.

This is a new progression I stole from my old buddy Mike Deracola from Strides Strength and Conditioning (one of his Lacrosse clients comes to my gym when he’s in town from college). Thanks Mike!

The same 2 criteria I mention above are still used at this progression.

For instance, if I saw this wrestler was losing his ability to effectively brace and stabilize his core (which would be indicated by a dip in the low back), then I would have him cut back on the number of reps he was performing. This would help ensure that each rep was performed properly.

If I noticed that he is unable to brace his core at all during this progression, I’d simply move him back to the Ball Rollout. I’d have him focus on holding the extended position during each rep to increase the difficulty of the exercise.

Keep in mind- progressing takes time. You may be able to perform a lower level exercise easily, but have difficulty at the next stage.

If you can’t properly perform the next progression, increase the difficulty of the current stage you’re on.

You get the idea, right?

As a wrestler you already know that success comes from hard work and determination, so don’t get frustrated. Continue to challenge yourself but at the same time be sure you understand the objectives of the exercise.

If you want your core to effectively stabilize in an unpredictable environment, the Ball Rollout progression may be just what you’re looking for.