Do This, Shoot Faster 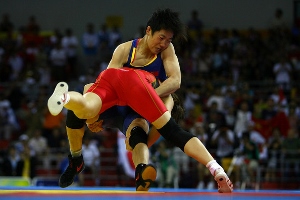 As you remember from my last post (click here to get caught up), you know I’ve been in search of a specific test(s) that is correlated with shot speed.

Here’s a video of me demonstrating the single horizontal jump from a seated position.

And here’s a seated triple jump after a thorough warm-up (sarcasm).

Finally, here’s a quick video of me introducing the Tendo Unit and how I’ve been using it to measure shot speed and power.

Each wrestler weighed himself fully clothed before the testing began.

I then had each guy start with 10 shots. They were hooked up as I demonstrated in the video above.

I measured each shot with the Tendo Unit and recorded both Peak Velocity and Peak Power.

I kept my Red Sox hat over the micro-computer so that none of the wrestlers could see their numbers.

Additionally, I didn’t give any verbal encouragement during any of the shots.

The wrestler then moved on to the jumping station where he performed 3 single horizontal jumps from a seated position.

After that, they then completed 3 triple horizontal jumps from the same seated position.

The big flaw that happened during the jumping portion, especially the triple jump, was that the guys were able to see how far their teammates were jumping. As a result, a triple jump competition began.

For anyone who this makes sense to, here’s what my statistician buddy found:

Analysis of Variance for pv, using Adjusted SS for Tests

What It All Means:

For the Average Joe’s out there here’s what the data means.

We are 90% confident the data shows a correlation between shot speed and triple jump performance.

According to my stats buddy, 90% is not that great. While it is statistically significant, it needs further testing and more data points to increase certainty.

This data is not does not include the error built in for the competitive jumping. He “built in” something to account for error that may have skewed the numbers.

Again, please remember how I concluded my last post- “It is important to keep in mind that although a correlation exists, it may not mean that jumping performance is necessarily the cause of sprinting performance.”

So, while a correlation has been found, I will continue to collect and examine data. At this point, it’s not definite that jumping performance can be directly correlated to faster shot speeds.

But, in the same breath, I think the implications are pretty exciting, right?