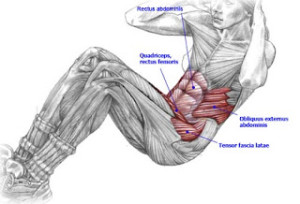 The Spread Eagle Situp is a less demanding core exercise that I like to use during warm ups. I also use it as an exercise to superset with an explosive exercise.

This situp isn’t demanding for the average wrestler. This makes it a great exercise to use without the risk of getting too sore.

Due to the fact that your feet aren’t anchored, the Spread Eagle Situp is especially good to superset with explosive exercises because it minimizes the activation of the hip flexors.

I tend to favor exercises like this when it comes to selecting what to superset with a power exercise. The primary reason is that getting too much activity in the hip flexors tightens them, which hinders hip extension. Ultimately, this leads to a decreased power output during explosive exercises.

Alright, with that said, here’s a quick video demonstrating how to do it:

One thing to focus on when performing this is to keep your heels in contact with the ground at all times. It’s not important for technique purposes, it just helps make measuring progress easier.

For example, say you can perform 10 Spread Eagle Situps while holding a 5-pound dumbbell behind your head. As a result, you decide to move up to using a 10-pound dumbbell.

However, you notice that you’re unable to keep your heels in contact with the ground, and instead compensate by lifting them off.

That breakdown in technique would be an indication that you should probably move back down in weight.

As far as how to progress the exercise- I suggest starting with a PVC pipe behind your head. From there move up by using a dumbbell or plate.

Keep in mind that progressing in this exercise takes time. Because of where the resistance is held, a little bit of added weight makes a huge difference.