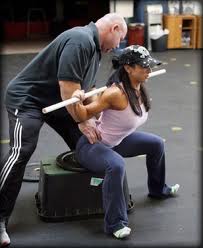 A must in a strength training for wrestling program!

I always bring up Box Squats when talking to someone about strength training for wrestling.

Squatting has, and will always be, one of the top three exercises I always make sure is in a lifting program for wrestlers.

What makes them such a functional strength training for wrestling exercise and, in some ways, superior to free squats?

Here are the top 5 reasons I prefer Box Squats when it comes to a strength training for wrestling plan.

Why Add Box Squats To Your Strength Training For Wrestling Program?

1. You can control your depth and hit it consistently every rep.

Ever notice someone free squatting at the gym?

More than likely this is what they did- they initially go very low on every rep during the warm-up sets. However, as the weight increases so does the height of their squats.

This is something you must avoid when performing squats. I’ll admit it though, I’ve fallen victim to this a time or too myself. It took me quite a while before I developed a good, consistent free squat.

However, once you do, you’ll never cut a squat high because it will invariably mess up your timing and make the squat more difficult even though you’ve shortened the range of motion.

But by squatting to a box and pausing on it for every rep, you know your hitting the desired depth every time.

It takes all the guess work out of squatting and allows you to focus on the task at hand- strengthening your legs so you can be a more effective wrestler and win more matches.

So if you find that you’re having trouble gauging how low you’re going each rep and getting your squats to a consistent depth, than box squatting may be just what you’ve been looking for.

Because the eccentric portion (sitting to the box) can be performed quicker than a typical free squat, you are generally less sore after box squatting than free squatting.

Additionally, when you add band tension to the mix, you perform the eccentric even faster!

As a result, you can squat more often and thereby have a greater potential to propel your strength gains.

I know what a lot of you are thinking, “Dickie, if I’m not hobbling around for 3 days after I squat I feel like I didn’t get a good workout in.”

And remember this- you’re a wrestler not a lifter.

This is important to keep in mind regarding anything related to your strength training for wrestling program.

Your focus when following a program should be to get as strong as possible with the right exercises and the right amount of volume so that you can practice and compete as effectively as possible.

Everything needs to be as in sync as possible so that you’re constantly getting better.

Yes, being strong is certainly going to increases your chances of winning, but if you haven’t practiced and developed your technique, you’re going to be at a huge disadvantage.

Strength training for wrestling is just one of the many pieces of the puzzle to maximizing your potential.

In wrestling, you’re often in stalemate situations on the mat, especially when you’re in on a shot.

Box Squats help to develop the functional strength needed to power through these stalemates.

You’re training your body to produce maximal force from a dead stop, deep squat position, much like you have to do on the mat.

There’s no bouncing out of a stalemate situation (or creating any momentum for that matter). But, if you’re strong enough, you can certainly drive through it.

More often than not, when a lifter misses a squat it’s at or close to the bottom portion of the movement.

What’s great about Box Squats is that if the lifter can’t complete the squat, they’re already sitting on a box and are at no risk of getting suddenly crushed by the weight.

See what I mean…

Can injuries occur when Box Squatting?

You can still fall forward, lose the tightness in your core when you’re on the box and injure your back. You can also lose control and sit to a box too fast which amplify the compressive forces on your back (this is the most common from my experiences).

Ultimately the issue of safety mostly comes down to being smart about the weight you’re handling. For instance, the other day I asked one of my buddies for a spot when I was squatting.

He responded with, “Yeah man, but I don’t know why you ask anymore. I’ve spotted you for years and haven’t once had to actually help you.”

My response- “Good, that means I’m not being an asshole and I’m actually making intelligent choices on the weight I can lift on a given day.”

Additionally, because you’re able to keep your shins perpendicular to the floor while Box Squatting, they are also safer for the knees due to the decrease in their range of motion.

If you’ve found yourself unable to squat without knee pain, definitely give Box Squats a shot.

Please keep in mind that this should be the solution only if you knees experience pain when squatting AND you’re squatting correctly.

Over the 10+ years I’ve been training people these are the 3 cases I’ve switched people to box squats because of knee pain.

1. Tyler Deuel, a NCAA qualifier and EIWA Conference Champ from Binghamton University. For whatever reason he just had a lot of knee pain after squatting, lunging, etc. I switched him to box squats and he was good for a couple weeks, but then started to experience pain again. So I then switched him to heavy Prowler push and sled drags. He hit these consistently all summer and pre-season and for the first time in years, was able to get through a wrestling season relatively pain free. He’s now able to Box Squat and Free Squat without any extra pain in his knees.

2. My dad (who at the time of writing is 66). He has arthritis that limits his knee range of motion. So to help make his squats more consistent, I have him box squat. He still has tightness in his knees, but his range of motion is a lot better now that he has an object to sit to.

3. One college wrestler who had fused ankles and physically couldn’t drive his knees forward forward even the slightest bit during any other lower body exercise. Box Squats enabled him to squat by allowing him to sit back and keep his shins perpendicular to the floor. I worked with him via email.

5. Box Squats have a higher Rate of Force Production.

Check out this research I found comparing force, velocity, and Rate of Force Production on a narrow stance squat, a wide “powerlifting” squat, and a box squat.

The researchers took 12 male, experienced powerlifters and had them test their 1 rep max. They all used their wide “powerlifting” style squat when testing.

Based on that max, the researchers had the powerlifters perform 2 reps per style of squatting using 30%, 50%, and 70% of their max. In total, it worked out to 9 sets of squats with between 2-4 minutes break in between (more than ample time to recover).

The two squat days were separated by a week.

Here’s what the found:

Peak vertical force, velocity, and power were similar in the narrow and wide stance free squats. These same measurements were slightly lower in the box squat.

However, Rate of Force Production in the box squat was, in all cases, 3 to 4 times higher when compared to the two free squat variations (see chart).

What does this mean and how should it impact your strength training for wrestling program?

During times of the year when it’s important that you train your body to produce force as quickly as possible- use box squats.

Based on the findings I’d suggest 6-9 sets of 2 reps using 50% of your max free squat (50% is where Rate of Force Production is maximized).

…the researchers suggest 3-6 reps, which is fine to try. However, if you feel like your explosiveness is starting to decrease as you push to hit extra reps in a set, cut yourself off.

Remember- the purpose of implementing box squats with 50% of your max is to maximize your Rate of Force Production. If you feel like extra reps are slowing you down, then simply stick to a number that you can keep your quality of effort highest.

Additionally, here is another important take home point from the researchers:

“The results from this study support claims that greater muscular forces are generated at the hip when attempting to maintain a more vertical shin position.”

Here are two quick videos of Dave Tate demonstrating and coaching the Box Squat. The one thing I do differently than Dave is I don’t have my wrestlers sit as far back.

The reason that powerlifers sit so far back is because it increases the tension in their squat suits which increases the amount of “pop” out of the hole that the suit gives them. However, this is not something that’s going to pay dividends for a raw lifter like yourself.

Because you’re going to be Box Squatting in your strength training for wrestling program focus on sitting back AND down by driving your knees out so that your shins stay relatively perpendicular to the floor. If they come forward a bit, it’s no big deal, especially if you don’t experience any knee pain from it.

Here’s the key- you want to be in a position on the box where if the box were suddenly removed, you’d still be able to hold that position.

When looking to construct a box, the best thing to do is be resourceful.

All you really need to focus on is setting something up that puts your thighs in a below parallel position to the ground when you sit on it.

Here are two pictures of ways to build boxes. 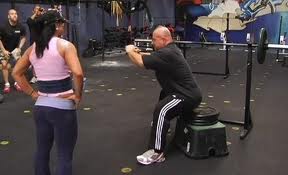 Stack plates on a low plyo box. This is not the most sturdy option. 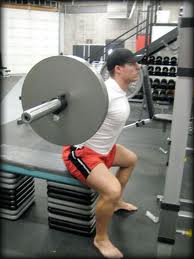 This is high, but the aerobic steps at many commercial gyms work well.

I’ve even go so far as to stack bumper plates. When it comes to strength training in an ill equipped facility, necessity is the mother of invention.

But at the same time- keep it safe. Don’t stack a bunch of stuff that’s unstable and could possibly shift or fall over during a set.

If you don’t have any good, safe options available, you can also buy an adjustable box at places like EliteFTS.