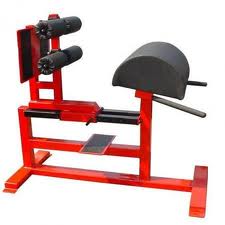 Unfortunately, this is not the most common piece of equipment in a commercial gym. However, the Glute Ham Raise, in my opinion, is the best way to train your hamstrings for wrestling.

There are a number of reasons I believe this.

First of all, it’s the most efficient way to train your hamstrings.

Because it trains both movements of the hamstrings simultaneously.

1. Knee flexion (pulling your heel to your butt).

Where do we see knee flexion in a wrestling match?

If you ride legs, you’re constantly pulling your heels to your butt and driving your hips forward to create pressure. I’ve found that the guys that I work with who are great at Glute Ham Raises are also the most effective on top.

What about hip extension in a match?

1. When you’re shooting on an opponent.

2. Lifting and throwing an opponent.

3. Sprawling on a leg attack.

5. Standing up to get off the bottom while trying to get your hips away.

Hip extension is part of nearly every important position in wrestling. This is why I am such an advocate for training that movement in your program.

This is a very informative video on the Glute Ham Raise.

If you don’t have time to watch the whole thing, skip to the last 2 minutes. Dave offers some great tips on the importance of foot placement in regards hamstring recruitment for this exercise.

Here’s a video I shot for my gym’s Exercise of the Month a while back. It explains the benefits of the Glute Ham Raise, how to set it up, and how to progress as you get stronger.

…I am anything but an impressive camera operator so bear with me! Fortunately my wife, Laura, does a good job demonstrating to make up for my lack of skills.

Make Your Own GHR

If you do not have access to a Glute Ham Raise, you should probably consider making your own.

Here are a couple of the best videos I found on how to make your own. Hopefully one of these two options is a feasible solution for you:

Another way you can use the Glute Ham Raise or a homemade variation is the Razor Curl. Here’s a quick video on how perform this variation:

Why go with the Razor Curl? When compared to a lying hamstring curl on a machine, it’s been demonstrated in research to be more effective.

Here’s what the researchers concluded:

“Thus, in an attempt to reduce noncontact ACL injuries, one should be targeting the hamstrings and gluteals. …However, if one wants to train the hamstrings functionally, one should focus on the razor curl. The razor curl is designed to increase hamstring contractibility by placing the hip into flexion. Essentially training by performing the razor curl, one accentuates all the other land-based training methods such as jump landing training in efforts to ultimately decrease the susceptibility of ACL injury.”

And here’s a nice graph summarizing the results of the researchers: 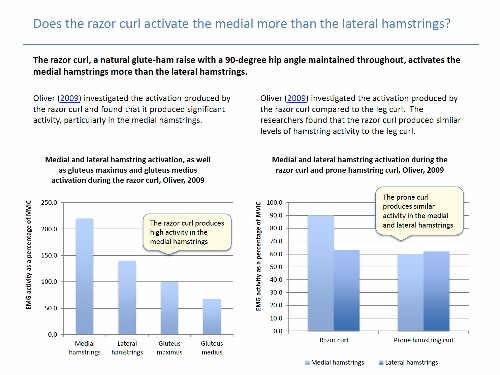 Dougherty. Comparison of hamstring and gluteus muscles electromyographic activity while performing the razor curl vs. the traditional prone hamstring curl. Journal of Strength and Conditioning Research. 23(8), 2250-2255. 2009.