How To Taper At The End Of The Year 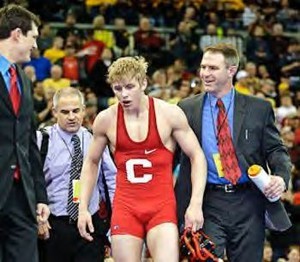 Have you ever heard observations at the big end of the year tournaments like “that team always shows up to wrestle” or “that coach’s kids always peak when it matters” or anything else along those lines?

…Doesn’t Mr. Koll always seem to have his guys at their best?

Being optimally prepared for state qualifiers, the state championships, conferences, and nationals are of the utmost importance to increase your chances for success.

And there are many different approaches to how to do it properly.

In some unfortunate cases I’ve heard of stories where coaches put their teams through some of the hardest workouts of the year just days before (and in one case, the day before!) major, end of the season tournaments.

I know that for many wrestlers the end of the year often determines whether or not the season can be considered a success. So, today I’d like to present a research study that may help you be better prepared when it matters most.

Research On Tapering For A Peak

Listen, I don’t want to spend too much time on breaking down this meta-analysis. Remember a meta-analysis looks at and summarizes the findings of a lot of research. In this case 27 studies met the criteria.

Instead, I’d like to quickly present the key findings and then get into what it means as far as how to apply it.

The researchers concluded that a tapering period of 8-14 days seems to produce optimal results as far as performance improvements go.

There are a number of variables that can be adjusted (frequency, intensity, volume). However, the conclusions suggest that maintenance of both frequency and intensity with a 41-60% reduction in volume produce the best results.

“However, as suggested by the 95% confidence intervals, negative results may be experienced by some athletes.”

Finally, a progressive taper (a term coined by the authors of this paper to include both linear and exponential tapers) has been shown to be more effective than a step taper.

This means that a gradual, day-to-day reduction from, say, 60% to 41% over the course of 2 weeks is more effective than doing a week at 60% and then dropping to 41% for the next week.

How To Use As A Wrestling Coach:

Week 1- Start by cutting the total volume of your workouts to 60% and over the course of the week reduce it to 50%.

…By the way, I hope no one out there is doing that much, at least on a regular basis. I can’t imagine it’s a recipe for success.

Anyway, if you’re crunched for time, do it over the course of 8 days.

The most important thing is to experiment and see what works best for your team. Perhaps you’ll find just a week going from 60% to 41% is effective.

How To Use As A Performance Coach:

This is a lot simpler since sets and reps are easier to track in a weight room setting compared to everything going on in a wrestling practice.

Sample set and rep schemes may be:

Then over the course of the next couple weeks, continue to take the volume down to whatever you find to be optimal.

Even though the research doesn’t say it’s necessary, I also like to drop the intensity during these weeks.

I can’t think of any successful competitive lifters (power lifters, Olympic lifters, Strongmen) who don’t do this.

Remember- the research above looked at runners, cyclists, rowers, and swimmers. Due to the high volume nature of these sports, the intensity can only be so high (ie you can only run a marathon so fast; you certainly couldn’t run one at a max sprint).

If you have any questions on tapering in an effort to peak, or personal examples that have worked for you, please share them by commenting below.