A Test To Determine Shot Speed? 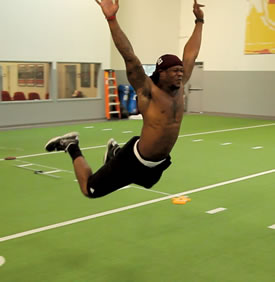 If you frequent my blog, you know that I’m on a mission to identify the best program and exercises to increase shot speed and power.

And while there is always room to learn and improve, I’m starting to draw a few conclusions from the research I’m conducting.

Believe it or not, some of the research I’m finding to be the most interesting are studies on sprinting.

At first I didn’t think to look at sprinting.

However, after thinking, it started to make sense- both wrestlers and sprinters are looking to move as explosively as possible in a horizontal direction.

And the research study below has me particularly excited.

…But then again, I am kind of a nerd.

Here’s a quick summary of what went on. If you have any questions on the study, just comment below and I’ll get back to you.

The researchers wanted to examine a horizontal 3 jump test and compare that to running performance.

Here’s an old video of “The Barn Cat” performing the type of jump used in the research:

He did 4 jumps, not the 3 used in the research. But you get the idea, right?

The subjects were Division 1 Track athletes. Both males and females participated.

The jumps were performed in a laboratory setting. In most cases, the sprinting times used were from previous competitions.

Here’s what they found:

Basically the correlation decreased as the running distance increased.

There was a strong correlation between the 60, 100, and 200 meter sprints and jumping distance.

And here’s what they concluded:

The running times were recorded at a different time from the jump test, so some variations like bodyweight may have influenced the results.

It is important to keep in mind that although a correlation exists, it may not mean that jumping performance is necessarily the cause of sprinting performance.