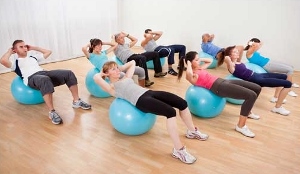 It’s been a great summer of training.

Throughout the spring and into the summer I’ve really been able to hone in on a very predictable system that’s been working consistently for all of the wrestlers following it.

In fact last week I had one long-time client (who started in 4th grade and is going into 10th grade next week) squat a 395 for 3 reps and perform this ridiculous deadlift:

But, as awesome as some of the big lifts have been, there was one experience that has definitely stood out- spending 6 weeks working directly with a number of wrestlers from Binghamton University.

I know what you’re thinking- man, that must have been easy, Dickie.

But you couldn’t be more wrong.

I’ve had a few experiences in the past with higher level wrestlers not being superstars in the weight room, and this summer was no different.

I had to make the usual technique adjustments as well as make changes to exercise based on what strengths/weaknesses I was seeing. However, I was most surprised by the lack of core strength in quite a few of them.

So, today I’d like to cover the basic Decline Situp and Back Extension progression. This summer I implemented it with quite a few of the wrestlers, including an All-American, to help improve their overall core strength.

In the case of the Decline Situp, I had a few wrestlers who had to take “1 step back to take 2 steps forward” in order to retrain their core.

For instance, a couple guys experienced a lot of back pain when performing this exercise. And when they put their hands behind their head or when weight was added, the pain became worse.

Additionally, the All-American couldn’t feel his abs working once he got to a certain height.

In both cases, or in whatever case you may be experiencing, the general rule to follow is to make the exercise easier until mastery is achieved. In this case, you would adjust the machine to have a more gradual angle.

Too often in a group of competitive wrestlers I see guys making bad decisions because they’re more interested in lifting more weight than their training partners. As a result, their technique suffers and/or they lose focus on the muscle(s) they’re trying to strengthen.

I know this may sound like bodybuilding principle, but don’t you think you should feel your abs working in a Decline Situp?

Knowing how to perform an exercise and how to progress it when YOU’RE ready is of the utmost importance.

In this case, I had to adjust the decline to its lowest setting and have them perform the exercise with their arms across their chest.

The focus at this stage, and for every stage for that matter, is on controlled execution, ab activation, and no low back discomfort.

Once those three criteria are met, progression can take place.

Don’t get crazy here. Simply move it up one level and try your next set.

If that feels good and is performed with the same control as you demonstrated in your last set, you can progress again.

Once you’ve progressed to the highest setting of the Decline Situp, the next step is to start performing the exercise with your hands behind your head.

It sounds easy, but if you’re not ready for it, you may need to lower the height a notch or two to ensure you’re meeting the 3 criteria above.

However, just like everything, if you stay consistent you’ll make improvements. Before you know it you’ll be able to perform Decline Situps with your hands behind your head at the highest setting.

After you’re consistent with your technique through Progression 2, you’re ready to start adding resistance behind your head. This progression is, for the most part, endless.

I’d start with a 5-pound dumbbell or plate to make sure your technique and activation don’t fall apart.

Once you’re confident with this new addition, feel free to progress as long as you meet the 3 criteria.

Again, they are- controlled execution, ab activation, and no low back discomfort.

I’ve mentioned it before, so I’ll just touch on it here. The wrestlers I train who have the strongest cores typically can do Decline Situps with a 30-pound dumbbell behind their head for 8-10 reps.

So make that a long-term goal in your training program, especially if you feel like your core strength isn’t up to par.

I know it’s called a “Back Extension,” but I use this exercise for another reason.

Specifically, it’s great at “teaching” wrestlers to use their hamstrings as hip extenders and move from the hips while maintaining a neutral posture.

I guess it’s better called a “Hip Extension,” but as long as you focus on this when performing the exercise, you’re free to call it whatever you want.

Again, for more on why moving around a locked and stable core is important be sure to read my post on core training for wrestling.

Anyway, the progression is essentially the same, so I’ll move through this portion of the post with less detail.

Before you get started, the first step is to properly set up the back extension.

I often see people set it up too high, and as a result, they can’t properly move from their hips. This ultimately forces them to compensate by using their back: 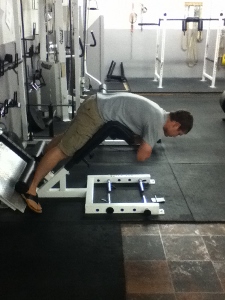 Instead, set the pad up lower so it’s just below your hip. That will enable you to move from the hips without forcing your back into a rounded posture. 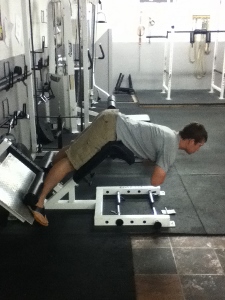 When you first start, focus on working within a range of motion that allows you to maintain a neutral posture. If you can only perform half the range of motion before you feel like you’re going to lose control of your core, simply work within your current capabilities.

As your familiarity with the Back Extension increases, your range of motion will follow.

Ultimately this is what you should be looking to achieve in the first progression:

Another thing to focus on as you perform Back Extensions is hamstring activation. Training your hamstrings to fire as hip extenders is paramount to laying the proper foundation.

If for whatever reason you don’t feel your hamstrings firing, simply perform a few reps of an exercise where you do.

The next progression is placing your hands behind your head.

In all honesty, this shouldn’t change things a whole lot, so you probably won’t have to spend a ton of time at this stage.

However, be sure to focus on controlled execution, hamstring activation, and a neutral posture throughout the 3 progressions of this exercise.

If things don’t feel right and you think one or more of the criteria for progression isn’t being met, spend more time at this stage to ensure you’re optimally prepared for the next.

Just like the Decline Situp, the final progression is adding resistance.

Start with a dumbbell behind your head and work up as you get stronger.

Once dumbbells become too difficult to support, consider using bands or manual resistance.

The word “core” has become a popular word in the strength and conditioning industry over the last few years.

Unfortunately, in a vast sea of “fancy” exercises, people have forgotten some of the most tried and true ways to develop core strength. In fact, many of these “fancy” methods are starting to be proven in research to be less effective than traditional movements that have withstood the test of time.

If you’re anything like me, you’re always up to try something. But in that quest, I urge you to not lose sight of the exercises that have been used for years to build a solid core in top wrestlers around the world.