The Missing Link In Your Program 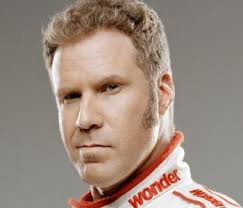 Want to drive through shots faster?

Want to get in on shots faster?

Anyway, the first two situations above are ones that I’ve been “consulting” with Kyle Dake on these last couple weeks. He’s doing everything he can to be at his peak before the NCAA Championships.

After a few messages, I started to realize that there is a very important aspect to a lifting program for wrestlers that often gets overlooked.

Vertical power production is almost always covered in a program. The most popular exercises used are Cleans and other Olympic derivatives.

However, horizontal power production is unfortunately not often addressed in performance programs for wrestlers.

Why Do You Need Horizontal Power?

Well, for starters, it will help you succeed in the situations above.

Wrestling doesn’t have a large vertical component to it. Yes, you sometimes lift an opponent to finish a leg attack. You also lift them to perform a mat return. But that’s about it, right?

Compare this to sports like Basketball or Volleyball. They both have a much greater need for vertical power production.

However, the leg strength/power required for wrestling is a bit different. As such, programs must address this.

The first thing you need to do is determine if you have a “starting strength” issue or you have an “elasticity” issue.

Say for instance you can jump 5 feet in one jump and 11 feet in two jumps. Doubling your single jump puts it at 10 feet. That means you produce more power when you’re muscles are loaded. This will be the case almost 99% of the time.

Ultimately this means that you need to improve your starting strength.

Another, more simple (and functional) way to assess yourself is to look at specific situations in wrestling that you feel need improvement. You need to do this as objectively as possible.

In Kyle’s case, he felt he could use a little more horsepower getting in on shots and finishing them.

A great majority of the time when you’re shooting your body is in a somewhat relaxed state.

Additionally, when you first get in on a shot, you’ll probably encounter the most resistance.

Producing enough power to overcome this resistance is the difference between scoring a takedown and getting sprawled on.

Essentially, both are starting strength. Fortunately there are a few specific exercises that will prepare your body to finish.

These don’t directly relate to horizontal power production. However, they are great at developing hip power from a relaxed position.

If you have questions on these, I detail a number of variations in this post.

Again, another indirect exercise. This a great one for training your legs to produce force from a compromised position.

If you have questions on Pause Squats, check out this post.

I use these a ton with the wrestlers I train.

They are the best way to build the necessary strength and power for finishing takedowns.

But Dickie, I thought Prowler pushes were just for making you tired and puke.

While this is true, they’re actually about as perfect of an exercise as you can get for developing functional takedown power.

First, it develops great starting strength/power because there’s no momentum when you first start. This is just like when you first get in on a leg attack.

Second, it trains your legs to produce force horizontally.

Third, it doesn’t “over-mimic” a penetration step (you’ll see what I mean in the section below).

Anyway, this is how I implement it…

How To Use The Prowler To Maximize Your Power

I got an email from the super smart Bret Contreras the other day. In it, he directed me to a new article that had just been posted by top biomechanics researcher, Chris Beardsley (check it out here).

Here are two charts presented in the discussed study that caught my eye: 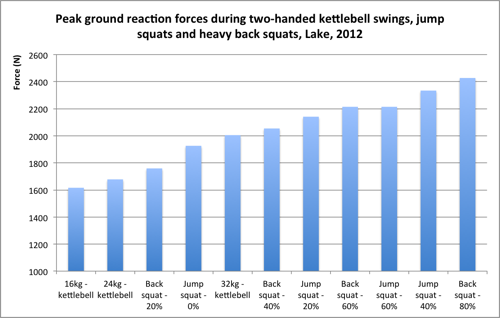 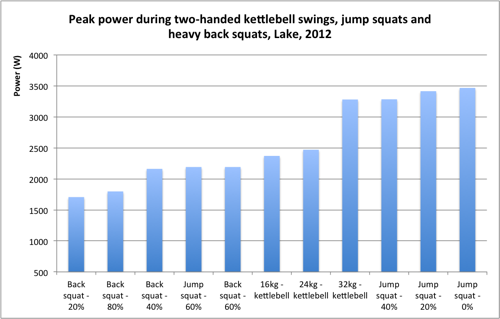 I know- scientific charts are boring! But wake up. I promise I’ll break it down for you.

What Do These Charts Mean?

The Jump Squat using 40% of your max was a close 2nd in peak ground reaction force. It was also a close 3rd in peak power production.

Creating a lot of force and power when you shoot means you’re more likely to score.

So, here’s what I do to make this a little more systematized.

Step 1- Determine a max weight for your Prowler push.

Requirements- Keep it around 8 yards, give or take. Why? Because in order to shoot, or finish a takedown you never need to cover much more than 8 yards. You either score in that distance or you go out of bounds.

Additionally, this needs to be a smooth push from start to finish. Don’t stop or it doesn’t count.

Step 2- Total up the weight. Include the weight of the Prowler

Step 4- Sprint with the Prowler using 40% (for the same distance).

I would recommend starting with 8-12 pushes after a thorough warm up. A good warm up is essential. It’s used to get your system firing on all cylinders. This will maximize your power on each push.

Take breaks as needed to ensure your effort stays high.

Remember- this is not a conditioning exercise!

We’re looking to maximize your horizontal power production here. So always prioritize staying explosive, even if it means taking a longer break.

Want to know how this type of training can improve your shot speed and power?

Read the results of my research- 2 Proven Ways To Shoot Faster.

Now, on to another common way to develop horizontal power…

Why You Might Not Want To Shoot With Bands

This is by far one of the most popular things to do as far as specific training goes. However, I don’t think it’s the best way to develop horizontal power for wrestlers.

Here’s an excerpt from a message that I sent to Kyle:

I know a lot of guys like to do shots with bands. I’m not a big proponent of this because in doing so, you can inadvertently train the body to take shorter penetration steps (due to the tension in the band). Ultimately this may lead to you not penetrating as well as you once did, thereby making you have to drive even harder once you get in on the leg attack; which is what you’re trying to improve.

Additionally, I’ve seen guys run/bear crawl with bands attached to them. I’m also not big on this for your particular case either because the amount of force needed at the start versus at the end is much lower. This is exactly the opposite of what you’re looking to achieve. You want to be able to produce higher levels of force as soon as you’re in on the leg(s) to better off balance your opponent and score the takedown. So once you get that initial blast and get your legs going, the resistance will more than likely become less; which is the exact opposite if you were doing it against a band.

…Anyway, those are just my rambling thoughts on using bands for resisted takedowns. Not to say that it won’t work, I just think if you have some of the options I covered above available to you that you should consider those first.

Obviously, you need to be able to push and drive with your legs, especially with the new international rules with the push out points.

However, as you know, too much push could result in getting thrown, getting hit with a slide by or duck under, or getting redirected with an elbow by and pushed out yourself.

Listen, to conclude keep this in mind- there’s no “formal” research that suggests one thing or the other.

Anyway, there’s one side that believes that the usage of bands are effective at developing horizontal power/leg drive.

And there’s another side that thinks this type of training may be resulting in undesirable neurological patterns being developed. Specifically this side argues that shorter strides will result from the increase in resistance. Ultimately, they feel that this will lead to distance/timing issues in a competitive setting.

I tend to agree with that argument. That’s why I caution against getting too wrestling-specific with bands. But, in the same breath, there’s something to be said that this method is being used to train high level athletes. So keep that in mind.

Regardless of how you go about it, find ways to start improving your horizontal power production today!