Too Focused On Being A Winner?? 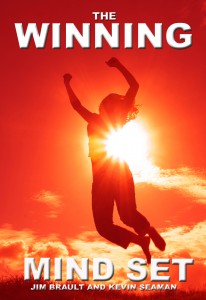 I know it sounds crazy, but being too focused on winning may actually be slowing your progress.

Below is an excerpt from The Winning Mindset by Kevin Seaman and Jim Brault which details what I mean.

By the way, this is the first lesson I shared in a post I wrote a while back- Wrestling Mental Toughness.

I once worked with a very gifted athlete, and he identified very strongly with being a winner. While that identity was useful in many ways, it had its drawbacks as well. As a winner, he had no time for helping the younger or less experienced players on his team.

After all, he was all about winning, not about helping others to develop (this was primarily an individual sport). Anyone who was not geared towards being supportive of his success was of little value to him.

He would also get extremely frustrated and tense if another person on his team got the better of him in practice.

As such, he would only practice with people he could beat, and he actually had a competitive intensity, almost a disdain towards his teammates that was generally reserved for opponents.

So while winning was certainly important to him, his primary focus on his identity as a Winner prevented him from also seeing himself as a Learner, a Teammate, a Friend, a Son, and a Teacher to the younger or less skilled athletes.

I asked him, “What does being a winner mean to you? In other words, what do you do or not do because you are a winner?”

He thought for a moment. “I train really hard, I can’t let up.”

“That seems like a good thing that you train really hard. That certainly helps you to win. What else?”

“I have a certain intensity. I hate when people dog it,” he said.

“Ok, what else do you do or not do because you are a winner?”

“Those are positive qualities, huh?” I remarked.

He nodded his head.

“What about being a winner is not as good?”

He frowned. “What do you mean?”

“Well, as a winner you have certain rules, a certain code of conduct that guides your behavior that dictates what you do or don’t do. You may not be aware of it, but it’s there.”

He thought for a while. “Well, I guess I have a pressure to always be the best. Sometimes that isn’t so great. I mean, I don’t feel like I can ever relax and just have fun, that it always has to be serious.”

“What does not feeling like you can relax and have fun do?” I asked.

“And what would just goofing off sometimes be like?”

“I guess I would like it more. Now, I can’t see doing this in college. It’s too much pressure,” he said.

“It’s too much pressure,” I repeated. “So let me ask you something. What if, instead of thinking of yourself as primarily a winner, you thought of yourself as a learner? What would that be like?”

“What if, when you went to practice, you said to yourself that you are here to learn, not to win, or perform, but learn; and you didn’t have to be a learner every day, but maybe once a week you focused on being a learner. How would that be?”

He pondered that idea. “I think it might be fun. I could try stuff out that maybe I was hesitant to before.”

“Sometimes when people identify so strongly with something, they aren’t willing to try new things. But if they get an opportunity to be someone else, even for a little while, they are free to explore new areas that can be very educational.”

He nodded his head, but said nothing.

“What if you though of yourself as a teacher? How would that change what you did and didn’t do?” I asked.

He raised his eyebrows. “Oh, it would be a lot different. I would probably help out with the other guys on the team. I would learn more techniques so that I could help everyone out, even if I didn’t use that certain move myself.”

“Ok, so you would learn more. What else?”

“I guess I would be interested in how other people learned, and what worked or didn’t work in terms of teaching them.”

“That would be interesting, wouldn’t it? How might that help you?”

Again he hesitated before answering. “I guess it would force me to look at things from different angles, and help me to learn things in greater detail because I would have to teach it.”

“What if, in addition to seeing yourself as a winner- which supports you in being healthy and taking care of yourself, and trying hard- you also saw yourself as a learner, and a teacher- so that you felt more relaxed and care free, and were willing to try new things, and you also helped others learn new things, and in fact learned more deeply about a whole series of things. What would that be like?”

“It would be great,” he said, nodding.

“It would be great, and you may even begin to wonder what other identities you could begin to focus on, like a teammate, that could help you even more, so as you go home you can begin to think about these things and become even more than you were before, in whatever way makes the most sense to you now.”

1. CLICK HERE to visit KevinSeaman.net and pick up a copy of his book and/or CDs.

I am required by law to state whether or not I am receiving compensation for promoting The Winning Mindset. I am not. I am simply trying to make you aware of a system that’s had a profound impact on my performance as well as some of the wrestlers I work with.

What I Learned From GSP

How To Get Mentally Tough This Season

A Mental Lesson That Slapped Me In The Face

The Secret To Success