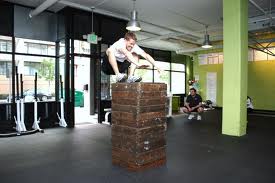 The Box Jump is another Speed-Strength exercise I use in programs to help develop lower body and hip power. Additionally, it’s a great way, to measure power production.

However, it is of the utmost importance that you have access to the right equipment.

Unfortunately, too often people don’t. I for one am against stacking random things on top of one another to make a box. It makes it really unstable and unsafe.

For example, one night I was spotting my brother, Chris, on a box jump. He had pieced together box and I, being dumb, encouraged him to try. Anyway, as you can imagine, he lost his footing at the top. His feet kicked out from underneath him, he fell backwards onto me and the boxes tumbled forward and ended up damaging one of the nearby benches.

For those of you who have never seen Chris, he’s 6’4″ and weighs a solid 250. Needless to say, I got squished under his Large American body. No one was hurt, but it made me realize the danger of jumping unstable boxes.

Anyway, here’s a quick video of one of the athlete’s I train. He’s since jumped on the higher box to the right (47-inches).

Because you’ve probably been jumping since you were a few years old, I trust that you have experience with the movement and don’t need it broken down into steps.

However, there are a couple of important things to keep in mind.

First, the biggest thing Chris always stressed to me was arm motion. Over the summer of 2008 he did an internship with Joe Defranco and was able to study the techniques of some impressive Box Jumpers. Many of Joe’s athletes regularly jump on boxes taller than 50-inches!

That’s my brother spotting him from the front.

When he started Box Jumping regularly, Chris said his best jumps were the result of properly using his arms. Watch the arm action in the video above to get a good idea of what your arms need to be doing to land a maximal jump.

It’s pretty natural to use your arms when you’re trying to jump maximally, so don’t think too much about it. Just be conscious of your arm action and try to coordinate it to help maximize your height.

The second big thing to keep in mind when performing Box Jumps deals with hip mobility. This greatly influences how high of a jump you can land. Watch the 2 videos above and notice how deep of a squat each guy is in when they first land on the box.

Also, check out this video by big Chad about Box Jumps and hip mobility.

One of the big criticisms that Chad addresses in the video is that Box Jumps are as much of a function of lower body power as they are of hip mobility/flexibility. Unfortunately, because of that, they aren’t the best exercise for developing power.

However, I always argue- aren’t flexible/mobile hips and legs important in wrestling?

Of course they are!

This is why I feel the Box Jump still has its merits in a training program despite the role hip mobility plays.

Additionally, another thing to consider is this- the ability to measure progress.

What I mean by this is simple. Say you’re able to perform a Box Jump to 40″ and land in a deep squat position. Then, 10 weeks later you’re able to land on a 44″ box with the same landing. Doesn’t that mean you’ve increased your lower body power?

When hip mobility/flexibility is already accounted for and consistent between the 2 jumps, you know that it’s truly lower body power that has increased.

Compare this to landing in different squat depths.

Say you jump to a 40″ during an initial test. You land the jump with very little bend in your knees.

Then, at the end of 10 weeks, you land a 44″ box jump. However, you land this jump in a deep squat position. In this case, there cannot be certainty that you have increased power in your legs.

So to conclude, while there are some arguments against how to land for a Box Jump here are the reasons why I’m ok with a deep squat position:

1. The above landing scenarios.

2. Joe DeFranco seems to be ok with it and he’s a pretty smart guy.

3. Having flexible/mobile hips is important to maximizing your performance on the mat.

Ok, that’s my mini rant for the day.

Be sure to check out the next post in this series: Med Ball Slam.

To read the first post in the series- Weight Training for Wrestling.