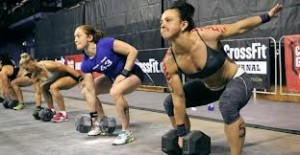 The next power exercise I use to build explosive hips and powerful legs with wrestlers is the DB Snatch.

In addition to training your hips to be super explosive, the DB Snatch also offers a few other benefits.

Both shoulder and core stability are improved when the DB is being held over head.

Between the improvements in power and stability, the DB Snatch is an excellent exercise to include in your program.

Traditionally this exercise is performed with a barbell (video below). But, when it comes to training for wrestling, I prefer the DB version for a number of reasons.

DB vs. BB For Wrestlers?

Second, when performing Olympic lifts it takes time to learn how to properly bail on a lift. And accidents can still happen even when you’re an expert…

From a safety standpoint, I’ve found it helpful to have a hand free in case a DB Snatch goes bad.

Getting a second hand on the DB makes it much easier to direct it back down to a safe position without running as high of a risk for injury.

Remember- you can’t get physically better if you’re injured and can’t train.

Start by holding a DB between your legs in a standing position. Your feet should be slightly wider than shoulder width apart (enough to make room for the DB).

When you are ready, lower to your Power Position. As soon as you’ve reached the end of your counter-movement begin to explode up.

As you start to get on your toes, begin to pull the DB up over your head as though you’re going to throw it through the ceiling. Of course, it’s in the best interest of your gym membership to hold on the DB. But, I find it helpful to imagine this in order to maximize your power output.

As the DB is continuing to travel up, drive your feet down as quickly as possible. While doing this, snap arm up as though it were a whip. Finish the lift by stabilizing the DB over head in a locked arm position. Bend at the knees a little to absorb the force during the catch, but don’t worry about dropping into a full squat like an Olympic Lifter.

Keep the DB as close to your body as you’re comfortable with. This will increase your efficiency and allow you to handle heavier weights.

Remember- as long as things are moving explosively, keep moving up in weight to increase your power on the mat. Just make sure your quality of effort and speed remain high. If you feel like an increase in weight is causing a dip in your power output, simply lower the weight back to where you feel most explosive.

Check out the next post in the series: Training For Wrestling- Med Ball Toss.

To read the first post in the series: Weight Training for Wrestling.